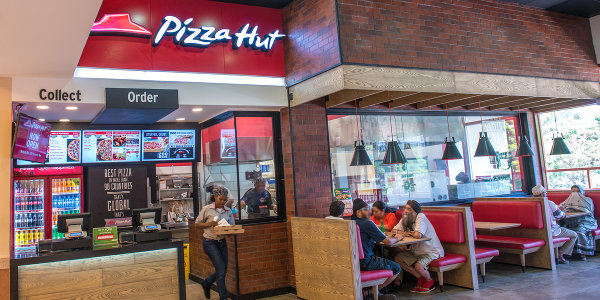 American restaurant chain Pizza Hut is seeking to further expand its presence in Africa following on the success of its sister brand KFC, which has over 1,000 outlets in more than a dozen countries across the continent.

Pizza Hut launched two stores in Kenya last Friday and is set to open another in Mozambique this week. Randall Blackford, general manager of Pizza Hut’s operations in Africa says Rwanda, Tanzania and Uganda are next in line, with plans to open branches next month. Pizza Hut is already operational in South Africa, Zambia, Angola, Morocco, Egypt, Mauritius and at a US military base in Djibouti.

Pizza Hut is owned by US restaurant group Yum! Brands, which is also the company behind KFC and Taco Bell. Expansion in the continent began with re-entry into the South African market in 2014. Until then it only had a presence in three countries – Egypt, Morocco and Mauritius.

“Africa has just been a great market for [Pizza Hut],” says Blackford. “South Africa has been good but we opened up Zambia over a year ago and it is just a really pointed difference that we see. Consumers [in Zambia] are really hungry and ready for international brands and want more variety than maybe they have been able to enjoy before. So Zambia is going great, Angola is going incredibly well, and Kenya is off to a really fast start.”

Feast Limited, the Kenya franchisee of Pizza Hut, made an investment of over US$1m in two stores located in Nairobi’s central business district and at the renovated Westgate Mall. It intends to open additional Pizza Hut outlets in Kenya later in the year.

“It has been a really exciting opening for both stores,” says Blackford. “We were surprised at how much people love the stuffed-crust pizza. That pizza sold out in the first couple of weeks and we had to do an emergency air shipment of more cheese for that.”

As it grows its geographical reach, Blackford says Pizza Hut is keen to understand and adapt to local tastes.

“[In Kenya, for example], we learned really quickly how much people love meat. We were totally floored by how much beef we were selling. Another exciting observation is the popularity of Indian flavours, so we brought in Indian sauce as a substitute for tomato sauce on top of the pizza, and they are selling really well.”

Across the continent Blackford notes that Pizza Hut has tweaked its menu in line with local tastes. In Mauritius it introduced a chocolate pizza that has been rolled out to other outlets in Africa.

“It is now one of our best-selling desserts,” says Blackford. “In every market we want to have a lot of global favourites on the menu, but then find local things that are exciting.”

In Kenya’s capital Nairobi, Pizza Hut will face off with a number of other restaurants such as Naked Pizza, Domino’s Pizza, Pizza Inn and Debonairs Pizza.

But Blackford adds the market is big enough to support “lots of brands”.

“We really feel good about going head-to-head with any other pizza [brands] in the country.”