At the start of the year I downloaded an app to learn to speak French. Within the first minutes I already knew the words for “boy” and “apple” and could say a few basic sentences. Not such a difficult language, I thought. Surely, if I do this for five minutes every day, I’d be able to speak a reasonable degree of French by the end of the year. But like most New Year’s ambitions, it didn’t last. My first day of learning French was also my last. 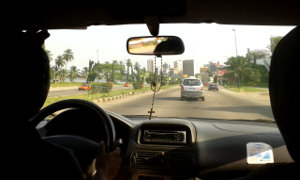 During my first visit to Ivory Coast two weeks ago I badly wished I could speak the language. Although I knew it was a francophone country, I was under the impression most people would still understand some English. I couldn’t have been more wrong. My lack of French severely restricted my experience, and made work difficult.

It also meant no chats with taxi drivers, normally a great source of information about a city. Whenever I wanted to go somewhere, I hailed one of the orange taxis and gave the address written on the back of a business card. Fares were negotiated by typing amounts into my phone’s calculator, or showing the amount I was prepared to pay in hard cash.

One evening this communication gap led to a rather tense moment. I was on my way back to the hotel when the taxi driver said something in French and then suddenly pulled off from the highway onto a dirt road where some guys where collecting toll in order to pass through. I was bewildered, not knowing where the driver was taking me. We however soon reached another road and it turned out he was simply taking a shortcut. Of course he did explain this to me… only I didn’t understand.

Not being able to really communicate meant several times I just had to go with the flow, trusting the food I ordered would be what I thought it was, or the taxi was taking me to the right place. (This didn’t always happen!)

In 2010/2011, Ivory Coast experienced significant unrest in post-election violence between supporters of current president Alassane Ouattara and those loyal to previous incumbent Laurent Gbagbo. This was preceded by almost a decade of instability and subdued economic growth.

These days Ivory Coast is, however, on the up with annual GDP growth in excess of 8% over the last two years. One of the risks is elections scheduled for later this year. Business leaders I spoke to said it is a concern, although most are cautiously optimistic things will go smoothly.

One of the interesting parts of my trip was being introduced to new companies and brands not really known in English-speaking Africa. Much of the commercial activity in Ivory Coast is controlled by companies with Lebanese roots. There is also a strong presence of French brands. Later this year French retail giant Carrefour will open its first supermarket. One expert I talked to mentioned that consumer goods companies should look at the French market as a reference point for products that should work in Ivory Coast.

My hotel was in the less-glamorous area of Yopougon. (It was cheap and had a great rating on Booking.com.) Countless people, even those working at the hotel where I stayed, thought my choice of neighbourhood peculiar. (If only they knew how weak the South African rand is.) But in the end I’m glad I stayed there. It showed me a different side to Abidjan that I would not have experienced had I lived in the business district Plateau, or another posh area.

In a way Abidjan felt like a French version of Lagos – mostly because of the sheer number of people everywhere, and the fact that it is also built around a lagoon.

Driving through the city, one is overwhelmed by all the commercial activity. Along the major roads hundreds of billboards promote everything from soft drinks to washing powder. Large beverage company trucks share the road with someone transporting cartons of eggs on the back of a bicycle. From bankers waiting in the hotel lobbies of Plateau, to street hawkers in Yopougon selling slaughtered chickens – everyone is hustling to carve out a life in this vast city of about five million people.

If only I had understood more of it…