Sugarcane growing estates in Zimbabwe include, Triangle, Hippo Valley, Mkwasine including Chapiwa (a re-settlement scheme where the farmers have about 10ha each) and Mpapa (a group of 17 farmers with about 35ha each). 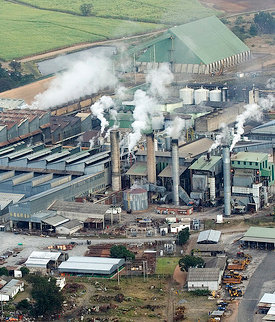 Mkwasine Estates is farmed by small scale farmers on a 8,200ha area. The Triangle operation is the biggest sugar operation in Zimbabwe, with crushing capacity of around 2.5m tonnes of cane per year and producing up to 300,000 tonnes of raw sugar per year. In addition, an alcohol plant attached to the sugar factory produces up to 25m litres of industrial grade rectified spirit from molasses annually, for sale predominantly into the regional market.

Hippo Valley, the country’s second largest operation, is listed on the local bourse. The company produces approximately 50% of the local sugar industry output and has a mill with an annual capacity of about 2.4m tonnes of cane at an average cane: sugar ratio of 8:1. Hippo can also produce up to 300,000 tonnes of raw sugar during a year of normal rainfall. In addition to sugar, the mill produces molasses, which is a by-product of the process. Molasses is used as an ingredient for stock feed and for the production of alcohol. The bagasse produced during the milling season is used for the generation of electricity, producing at most 30 megawatts at optimum capacity.

There are two stand alone sugar refineries in Zimbabwe, owned by Star Africa Corporation Limited, located in Bulawayo and Harare. The total capacity of the refineries is 260,000 tonnes and these produce white sugar.

Additionally brown sugar is produced by the two sugar mills, Hippo and Triangle.

Sugar pricing varies in accordance with market demand and supply. Several competitor brands also enter the market from the region.

65% of the sugar produced is for the domestic market and the remainder is exported to the region, United States and to the European Union. Exports to the EU for 2009 amounted to about 148,000mt of sugar, while in 2010 USDA estimates total exports will reach 150,000mt. Zimbabwe’s market to the EU is secure for the five years from September 2010 to 2015, implying the country can export duty-free and quota free sugar to the EU subject to the ‘safeguard clause’ of the Economic Partnership Agreement with the EU.

The EU recently set aside EUR45m for the Zimbabwe sugar industry and outgrower productive capacity; of which EUR 9.3m has been approved for disbursement. The funds are meant to arrest the decline in production capacity, re-establish A2 farmers and restore overall industry capacity to 600,000 tonnes under a National Sugar Adaptation Strategy (NSAS).

Nontando Sibanda is an analyst at Imara, the pan-African financial services group.