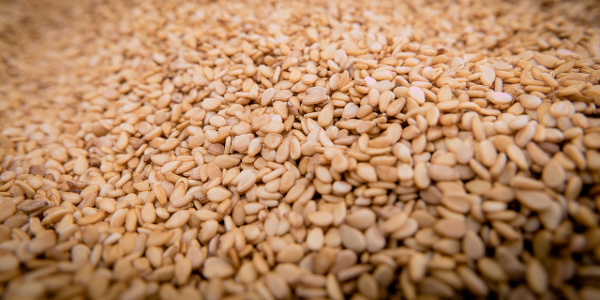 Sesame is one of the oldest crops known to mankind. The tiny seed, first used in the Middle East in 2000BC, also commands a billion-dollar export revenue for Africa. China used to be the world’s biggest exporter of sesame, but now the country’s farming habits have changed – and Africa is filling the void. The continent’s production of sesame seeds is rocketing, with some countries experiencing up to 20% growth.

Sesame is used in various forms, the most common being toppings on burger buns and bakery products. Many traditional Asian dishes have sesame as an important ingredient, while sesame oil is used as a garnish in various eastern dishes and for frying Japanese dishes such as tempura. It also has the highest oil content among all oil seeds.

The farming landscape in Africa

Many of Africa’s farmers are smallholders, often farming between one and three hectares of land with limited technical assistance. Typically, a smallholder might choose between cotton, sorghum, maize, groundnuts and sesame. The farmer’s choices are governed by how much money they can make from their limited resources. If they have enough land and resources, they could grow more than one crop.

Sesame is a tough crop, growing in areas where most other crops would find it hard to flourish. It is a 90- to 120-day annual crop that grows best in dry conditions, so it does not suffer in drought.

At sowing stage, sesame needs good moisture in the soil, followed by a rainfall of 30-50cm during the first 60 days to reach a good yield. Towards the later stages of plant growth, rainfall is not good for yield. However, the yield per hectare for sesame is low, usually ranging between 150 and 350kg.

Surprisingly, the crop output does not increase significantly with the application of fertilisers. Half a crop can be lost by mechanised harvesting, so the sesame seeds are collected manually. This means a farmer needs a worker threshing the crop with a machete. Given this, labour costs are an important consideration as to where one would set up a sesame production unit.

For a farmer with enough low-cost hands for the harvest and enough land to take care of lower yields, sesame can be a very good option.

The constraints of large farmland and high manpower requirements give an edge to African farmers. The only place in the world where arable land and manpower is available for expansion is in Africa. While large agricultural producers like Argentina and Brazil have attempted industrial-scale sesame production, they haven’t had the success that African growers have.

African production has grown at a compound annual growth rate (CAGR) of 9.5% over the last eight years. During the same period, global consumption has increased by 2%.

Growing consumer demand and reduced domestic production made China – the world’s biggest exporter in 2005 – the biggest importer of sesame seeds in 2011. The land usage and changing priorities of Chinese farmers have led to this change, and the African farmer has picked up where the Chinese farmer left off. Had this not happened, sesame would have become a very expensive delicacy.

Commercial opportunities would not have been possible without the companies who worked closely with both farmers and end users to increase volumes for customers. Olam is one contributor in this success story. We ran campaigns educating farmers on how to grow sesame and preserve the quality in the limited infrastructure of Africa and hosted training programs using model farms. This ‘Train the Trainer’ programme helped some of the countries achieve a CAGR as high as 20%.

While the production of traditional sesame growers like Ethiopia and Sudan also increased, the major growth came from other countries – Nigeria, Burkina Faso, Mali, Tanzania and Mozambique, where the production has grown up to four times in eight years. Sudan is the largest producer of sesame in Africa, with more than 2.1 million hectares of production area.

Apart from providing liquidity to farmers in the form of working capital, Olam also set them up with end-users who were looking for reliable suppliers.

There are many crops helping to grow Africa bit by bit and the role of sesame is clear. There are challenges – but there are also opportunities. One day all these will add up and for Africa the magic words will be, “Open Sesame”.

The author, Sanjeev Sharma, is Business Head – Sesame, Olam International. This article was written specifically for NTU-SBF Centre for African Studies, a trilateral platform for government, business and academia to promote knowledge and expertise on Africa, established by Nanyang Technological University and the Singapore Business Federation.