“Many of the fastest-growing economies in the world are here in Africa, where there is an historic shift taking place from poverty to a growing, nascent middle class. Fewer people are dying of preventable disease. More people have access to health care. More farmers are getting their products to market at fair prices. From micro-finance projects in Kampala, to stock traders in Lagos, to cell phone entrepreneurs in Nairobi, there is an energy here that can’t be denied – Africa rising.” 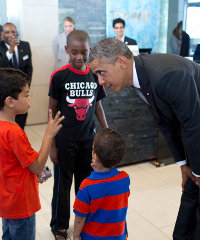 This was said by United States President Barack Obama yesterday during a speech at the University of Cape Town (UCT) in South Africa. His speech forms part of Obama’s visit to three African nations: South Africa, Senegal in West Africa and Tanzania in East Africa. His trip to the continent is reportedly part of the US’s efforts to boost political and commercial ties with Africa.

However, while Obama acknowledged that there is an African growth story taking place, he added that it rests on a fragile foundation where challenges of corruption, political conflict and inequality still exist. “So there is no question that Africa is on the move, but it’s not moving fast enough for the child still languishing in poverty in forgotten townships.”

Obama said that the young people in Africa are going to be the ones making the decisions concerning the continent’s future, adding that over 60% of Africans are under the age of 35 years.

“So demographics means young people are going to be determining the fate of this continent and this country,” he explained. “You’ve got time and numbers on your side and you’ll be making decisions long after politicians like me have left the scene.”

“And I’ve travelled to Africa on this trip because my bet is on the young people who are the heartbeat of Africa’s story; I’m betting on all of you,” he told the students at UCT. “As president of the United States, I believe that my own nation will benefit enormously if you reach your full potential. If prosperity is broadly shared here in Africa, that middle class will be an enormous market for our goods. If strong democracies take root, that will enable our people and businesses to draw closer to yours.”

According to Obama, the US is moving away from their traditional relationship with Africa of foreign aid to a “partnership of equals”. He also added that increased trade and investment from the US has the potential to create new jobs and opportunities for both the US and Africa.

“So I’m calling for America to up our game when it comes to Africa,” he continued. “We’re bringing together business leaders from America and Africa to deepen our engagement. We’re going to launch new trade missions, and promote investment from companies back home. We’ll launch an effort in Addis to renew the African Growth and Opportunity Act to break down barriers to trade, and tomorrow I’ll discuss a new Trade Africa initiative to expand our ties across the continent, because we want to unleash the power of entrepreneurship and markets to create opportunity here in Africa.”

New US initiatives in Africa

From a commercial point of view, Obama highlighted the potential in Africa’s agriculture. “Through a new alliance of governments and the private sector, we’re investing billions of dollars in agriculture that grows more crops, brings more food to market, gives farmers better prices and helps lift 50 million people out of poverty in a decade. An end to famine, a thriving African agricultural industry – that’s what opportunity looks like.”

Obama also announced the introduction of a new initiative which he said will double access to power in sub-Saharan Africa, called Power Africa. “We’re going to start by investing US$7 billion in US government resources. We’re going to partner with the private sector – who themselves have committed more than $9 billion in investment – and in partnership with African nations we’re going to develop new sources of energy. We’ll reach more households – not just in cities, but in villages and on farms. We’ll expand access for those who live currently off the power grid and we’ll support clean energy to protect our planet and combat climate change.”

The solution to Africa’s problems lies within Africa

Obama’s speech highlighted many of the political and social problems that typically hinder the continent’s growth and development, from crimes against women to poverty. However, he said that while the US will offer their support, the solution to Africa’s troubles should come from Africans.

“Now ultimately, I believe that Africans should make up their own minds about what serves African interests,” he said. “We trust your judgement, the judgement of ordinary people. We believe that when you control your destiny, if you’ve got a handle on your governments, then governments will promote freedom and opportunity, because that will serve you. And it shouldn’t just be America that stands up for democracy – it should be Africans as well.”

Obama travels to Tanzania today for the last part of his Africa visit.