US President Barack Obama’s visit to Africa (stopping over in South Africa, Senegal and Tanzania) has caused a fair share of hullabaloo from various factions. The trip is officially wrapped in a friendship blanket to reinforce bilateral engagements, trade, investment and promote democracy. Some have however sought to take advantage of this visit via political jockeying, and other social groupings have made a mockery of themselves in outcry of President Obama’s landing. 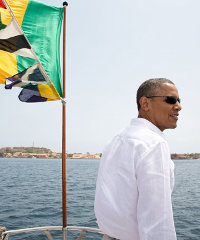 In this picture, taken yesterday, President Barack Obama stands on the bow of the ferry to Gorée Island, Senegal.

Whatever your personal sentiments, the economics are undeniable.

Companies from the United States remain Africa’s largest investors in greenfield projects (new projects started from scratch) – measured both over the last decade, and over the past five years during a global financial crisis that hit US business severely.

Last year saw mixed results for new project foreign direct investment (FDI) into the African continent. Overall project activity declined approximately 12% year-on-year, even for South Africa as the continent’s leading and most attractive destination for new project investments, there was a marginal year-on-year decline of 3%. This was, however, in keeping with global trends, which saw a more than 15% decline in FDI project activity. Yet even as Africa received less interest in projects, its percentage share of the total FDI pie increased.

Those foreign firms actively doing business on the continent have expressed significant confidence in project potential, not just via survey results from Ernst & Young Africa’s Attractiveness Survey, but by reinvested earnings back into existing operations. The net flow of capital for the foreign businesses in Africa as a collective was therefore positive, even though greenfield activity came off slightly from the previous year.

Last year, US firms invested less into projects in Africa by a quite substantial 22% year-on-year, but in South Africa, US foreign companies upped their investment interest slightly, to reach 37 projects – meaning that in 2012, South Africa made up an impressive 38% of the US’ entire African greenfield FDI (versus 28% in 2011).

United States headquartered companies have injected the majority of capital spend (43%) into extractive industries, with manufacturing lagging behind in second with 26% of total US FDI capital since 2007. Though, by project activity, US manufacturing FDI into Africa attracted 16% of all projects, with extractives only 4%.

A mixed bag to make sense of, but basically more manufacturing interests translates into broader and more powerful economic diversity and growth.

The widely defined service sectors are attracting nearly three-quarters of the project interests and one-tenth of the capital invested – speaking to the near US$1 trillion consumption expenditure that is the major component of Africa’s GDP.

In a particular year, depending on intensity and scaling up of businesses, the FDI splits can be grossly distorted. For instance, in 2012 alone, the US recorded only one extractive project, this against 13 for manufacturing. Yet these manufacturing projects receive only one-fifth of the capital allocation of that single extractive project.

As a side-bar and more alternative point of view, I was struck by a media report quoting the Washington Post as estimating that this African visit of President Obama will cost in the region of $80-90 million.

I was then curious to ask which FDI investment project this would compare to.

For last year, one may recall an almost comparable amount of $108 million for an ICT infrastructure FDI project, or a single $83 million automotive manufacturing investment, both made in South Africa. This five day African visit would seemingly cost double the entire US’ investment in Mozambique for 2012 (of  $48 million) towards manufacturing projects in the beverage sector; or be comparable to the $65 million for a total of seven projects cumulatively into Senegal since 2007.

Similarly, the visit’s expenditure is on par with the eight projects and near $90 million of capital investment made by US firms in Nigeria during 2012.

This is fun, but the serious question to ask is whether US FDI has lost ground relative to other key investors?

Apart from the US, firms that are headquartered in UK, France, India and South Africa make up the continent’s top five most active project investors.

There is not enough space here for a deeper synopsis, but let me briefly highlight China. Their FDI numbers are understandably understated, as a very large portion of Chinese investments into Africa would fall under the “development assistance” umbrella, with some of these infrastructure roll-out packages (in particular) agreed at bilateral state level, and backed by a resource off-take agreement.

Also, media reports are regularly saying that South Africa has close to, or more than, 600 firms of US origin doing business in the country. That is quite a serious number, considering that recent estimates from Standard Bank research states that as of 2012, there were 145 Chinese companies active in South Africa, 653 in the Southern African Development Community (SADC) countries combined, and 1,968 in all of Africa.

An estimate of jobs created by FDI shows that since 2007, the US contributed to 7.9% of all jobs created from the total pool of FDI committed during this period, and the Chinese contributed 7.1%. Similarly, 8.3% of all capital allocation came from US firms, and 6.4% from Chinese – for both, it is not such a dramatic difference, but unmistakably in the US’ favour.

The main destinations for US firms in sub-Saharan Africa are South Africa, Nigeria, Kenya, Ghana, Angola and Ethiopia; with most new capital going to Angola, South Africa and Nigeria.

The main destinations for Chinese firms in sub-Saharan Africa are South Africa, Zambia, Nigeria, Ethiopia, Kenya, and Angola; with most new capital going to Nigeria, Angola, and Liberia.

Apart from Ethiopia and Kenya, the rest are rich in resource exports.

A major juxtaposition comes from economic activities that US and Chinese investors are active in. The US has 42% geared towards extractions, while the Chinese has half that (22%); the roles are reversed for manufacturing, as the US invests 26% into manufacturing, and the Chinese nearly double that at 57%.

The main point to make is that US firms in Africa remain steadfast and are still the benchmark in many (if not most) sectors, while Chinese ones are making rapid inroads in manufacturing, and in fact leading the charge for infrastructure projects.