Cassava, a woody shrub with an edible root that looks like a large sweet potato, is one of the most widely grown crops in Nigeria, produced largely by small-scale farmers. Although cassava roots can be processed into a variety of products – including cassava flour, starch, ethanol and glucose syrup – the crop has not been a great commercial success. 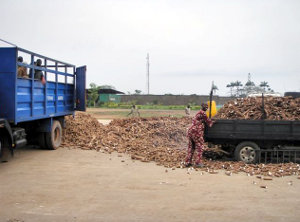 A South African-born businessman is, however, at the forefront of commercialising cassava in Nigeria. Louw Burger is the man behind Thai Farm International, a 90 ton a day cassava processing company, located 120km from the country’s commercial hub Lagos. The plant currently turns cassava into flour, although the company is looking to move a step up the value chain by producing starch. In 2012, Flour Mills of Nigeria, a Nigerian Stock Exchange listed company and one of the country’s largest wheat millers, bought a controlling stake in Thai Farm.

But why would a wheat milling company all of a sudden be interested in cassava? Well they don’t really have choice.

To reduce dependency on imported food and to boost Nigeria’s agricultural sector, the government has issued a directive that requires bakers to add a certain percentage of high-quality cassava flour into their mixes. Cassava flour is also much cheaper than wheat flour.

From banking to cassava

Burger spent his early career in banking, first with Citibank in South Africa, and then looking after South African lender Absa’s business in Asia for many years. He came to Nigeria a decade ago, on what was supposed to be a brief stay to turn around a struggling business owned by one of his Asian friends. After this he took on an assignment at a local Nigerian bank. It was during this time that he met and married his current wife, a Thai businesswoman running a trading company in Nigeria.

When his work at the bank was done, Burger needed something to do. He looked at a few options, until someone suggested to him to get into the cassava business.

“I had never heard of cassava, but Thailand is the world’s largest exporter of starches made from cassava. We went to Thailand a lot anyway, so we went back and saw that in Thailand, starch from cassava is a US$5billion a year industry. In Nigeria cassava is an indigenous plant and very widely cultivated, mainly on a peasant farming basis. It is like bringing a factory into a country that already cultivates a massive quantity of the stuff. So these elements all came together, and we started the project,” he explained to How we made it in Africa.

The concept was birthed to bring Thai cassava farming and processing technology to Nigeria to increase the production and processing of cassava roots.

Burger says that although reliable numbers are scarce, there are probably around five industrial scale cassava processing companies throughout Nigeria, existing alongside numerous smaller producers and backyard operations.

Thai Farm currently sources the majority of its cassava from commercial farmers in the central part of the country. It used to get most of its crops from smallholder farmers, but these days, due to a steep rise in food prices, farmers prefer to sell their crops to local women entrepreneurs who use the cassava to produce an indigenous food called garri. “The garri buyers are paying silly numbers because the price of their food has gone up by 250%,” Burger noted. Thai Farm has, however, started investing money in its own farming operations. 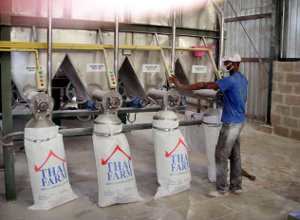 Despite Thai Farm’s success, Burger said there are many challenges of operating in Nigeria.

One of his headaches is finding suitable people to work at the factory. Cassava factories need to be situated close to the farms due to the crop’s short shelf life. After it has been taken out of the ground, cassava needs to ideally be processed within 48 hours before it goes bad. This means that once the crops come in, the factory often needs to operate 24 hours a day.

Transport is also a challenge. “Transport in Nigeria is hellishly expensive, and typically run by small companies – one, two, three truck people that are not that reliable. With the unreliable transporters, you’ve got bad roads, you’ve got harassment by government officials on the roads. This afternoon I counted my permits that I carry with me in my vehicle – 48 different documents. And then they stop you on the road, and they count your documents, and they say, you don’t have this paper, and that paper, and they try and squeeze money out of you by selling you another permit.”

Despite these troubles, Burger believes Nigeria’s business environment has improved considerably over the past decade. “I’ve seen a vast, vast improvement in ten years. I mean ten years ago if you went out on a Sunday, you got stopped at a police roadblock with the policeman literally putting a gun to your head and demanding your vehicle papers to try and intimidate you into giving him money. Now that doesn’t happen anymore. It has improved a lot. I mean in the last six months I’ve driven 30,000km on the roads across south-western Nigeria – and they’ve started putting money into fixing up the roads. There are still vast areas where the roads are still really, really bad – but the roads have gotten better.”

Burger is also encouraged by the fact corruption is a daily debate in the press. “It is openly talked about, and openly condemned.”

“I think Nigerians have reached the bottom of the pit, they’ve been through the deepest, deepest dark dip, and they saw what happened to their lives and they said, ‘hell no, we don’t want this’. It remains a challenging environment, but I’m of the opinion, that in the ten years that I’ve been here, it has gotten a lot better. If they continue on the path that they are on now – this is not going to be a bad place to be in another five to ten years’ time,” he said.