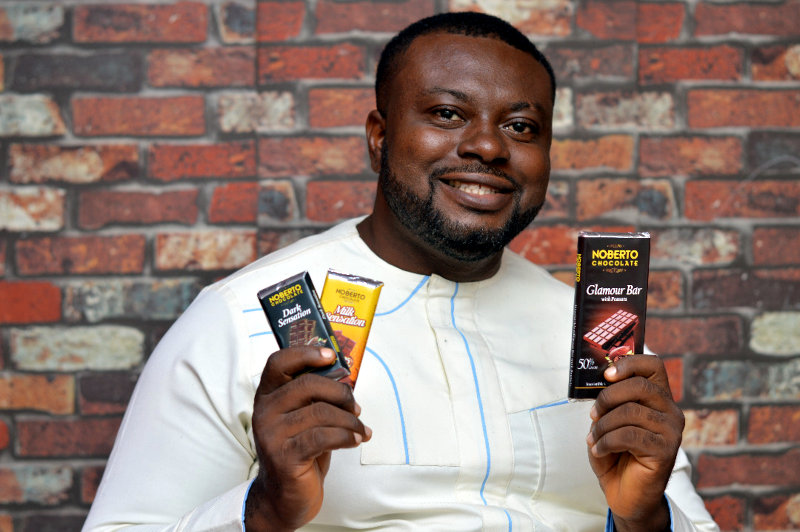 Nobert Okafor, CEO of Noberto Group, with the chocolates his company produces.

Selling has been in Nobert Okafor’s blood since he was seven years old. At the time, he would spend Christmas and holidays with his grandmother who grew bananas at her compound in the village of Nimo in Anambra state, Nigeria. She would give the harvest to young Okafor, with the instruction to go make some sales.

“I would start in front of her house and when the demand dwindled, I moved the location to the front of my father’s compound. It was along a busier road,” he remembers. “When that didn’t result in sold-out stock, I went to the village market.” Following the demand worked and Okafor would receive praise from his grandmother when he returned having sold all the bananas.

Jump forward three decades and today Okafor (37) is the CEO of the Noberto Group, with its subsidiaries Nobleman Industries, Joofid Construction Company, Noberto Farms and the latest addition, Noberto Renewable Energy. He is still actively chasing sales but has added plantain and cocoa to the bananas, as well as the products processed from these crops.

Okafor was making preparations to travel for further studies in either the UK or US when his father passed away in 2004. He had to cancel his plans so as to take over the family business. His father had established an equipment business, building Caterpillar heavy machinery from scrap and spare parts for rental to construction contractors. When construction clients were in short supply during the rainy season, the family would work a small patch of land, using a tractor they owned.

“That was my first experience with mechanisation and its impact on farming when I had to help my father as a teenager,” he recalls. From 2004 to 2010, he ran the family business and a few side hustles. Any profit was stowed away for his future entrepreneurial plans, which focused on agriculture.

In 2010, Okafor founded the first company in the group, Nobleman Industries and acquired 500 hectares of land in the Nigerian state of Cross River. He established a cocoa tree nursery and transplanted the trees onto 100 hectares. Plantain trees were interspersed between the cocoa trees to provide additional moisture during the dry season.

The Noberto Group supplied the cocoa harvest to the merchants who then sold it on to the exporters.

Okafor immediately saw a challenge that needed to be addressed. The fluctuation in the price that raw cocoa beans were fetching on the open market was less than ideal and he decided diversification further up the value chain would help the business.

He began testing his own chocolate recipe in his garage, grinding the cocoa beans by hand and adding sugar and milk until he was happy with the taste. Friends received the chocolate to sample and soon encouraged Okafor to produce on a larger scale so they could buy.

Slowly, he divested some of the inherited land assets from his father as well as heavy construction equipment and scrap. Bit by bit, the company acquired the machinery needed for cocoa processing from the US and by 2015, Okafor had raised enough capital to set up a processing facility in nearby Enugu state on land his father had previously procured. 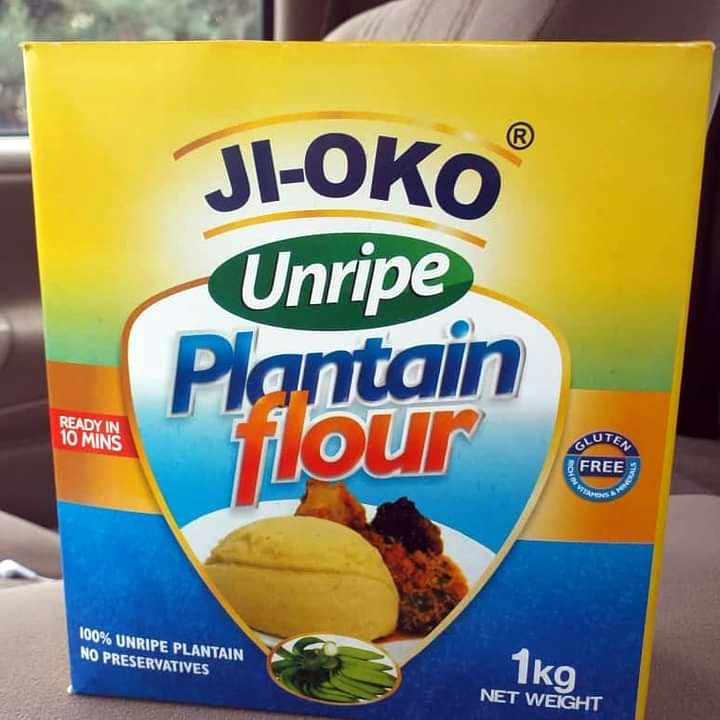 The first branded chocolates landed in the market that year. At the same time, it started processing gluten-free flour from the plantain on its farm. Noberto Group worked hard to get its products onto the shelves of retailers, gaining traction steadily over time.

In 2018, the group added 30 hectares of land in the Uzo-Uwani local government, near the town of Adani, about two hours from its factory.

When the cocoa is harvested from either of the locations, it has to be fermented for five days and dried for another four, before being bagged and transported to the factory. Once there, the final sorting of the beans is done by hand and they are roasted. The roasted beans are cracked and winnowed (the process of removing the outer shell of the cocoa bean). Some of the meat from the cocoa bean is then processed into cocoa cake and butter used for cocoa by-products or combined with milk and sugar to make milk chocolate. The rest is ground and used to produce dark chocolate or cocoa powder.

The finished chocolate bars and candies are still hand-wrapped but Okafor hopes to soon mechanise this.

Diverse products for the local market and beyond

For now, the Noberto Group is focused on expanding its presence in the Nigerian market. Its chocolate products are available in local supermarkets and pharmacies in seven states while the cocoa powder, plantain flour and banana powder are sold directly to bakeries. The cocoa butter is bought by producers of body lotion.

The group does its own distribution within Enugu State, but outside these borders, it has distributors that buy directly from it and supply to supermarkets.

Exports are not entirely off the table. Okafor believes there is a global market for plantain flour, with demand coming from African expats and consumers looking for a gluten-free option. “We are working with the Nigerian Export Promotion Council on export opportunities,” he says.

For the chocolate products, the group is looking at the regional market and possibly Asia. “We don’t really see a market in Europe for our finished chocolate products. Perhaps the cocoa by-products that we produce, like cocoa butter, could find a market there.”

Noberto’s current processing capacity is 10 tonnes of cocoa a month. Keeping growth slow and steady in the beginning, was deliberate, according to Okafor, as he wanted to test the product offering with the perfect recipe for local tastes before pursuing growth in all earnest.

“We now have seven recipes for chocolate candies that our people like and can now look at making bigger investments and finding equity partners.”

On top of the capacity for cocoa, the group can process five tonnes of plantain a month into flour and three tonnes of bananas into powder.

At its premises in Enugu, the company is now raising cattle. The medium-term goal is to substitute all procured milk needed for the processing of chocolate with its own milk. To this end, it is artificially inseminating the cows to build the herd.

“The processing has differentiated us from other cocoa producers in the area,” says Okafor. “The moment we went into processing, it gave our business a new face, an edge.”