Micro-blogging platform Twitter is growing in popularity on the African continent, with users from South Africa, Kenya, Nigeria, Egypt and Morocco leading the pack.

Communications company Portland, in association with Tweetminster, recently released a map of Twitter use in Africa. To produce the map, over 11.5 million Tweets hailing from the continent were analysed. Five-hundred of Africa’s most enthusiastic Twitter users were also surveyed.

It is interesting to note that the number of tweets from the five countries, don’t correspond to the total internet users in each of the territories. For example, Nigeria has far more internet users than South Africa, but South Africans are much more active on Twitter.

Portland’s research found that 57% of tweets originating from Africa are sent from mobile phones. The research also shows that 60% of the continent’s most active Twitter users are aged 21 to 29.

Twitter in Africa is mainly used to communicate with friends, with 81% of respondents saying they use the service for social conversation. However, 68% also use Twitter to keep up to date with the news.

Unlike in developed countries, many of Africa’s more public figures are not very active on Twitter. “With some notable exceptions, we found that business and political leaders were largely absent from the debates playing out on Twitter across the continent. As Twitter lifts off in Africa, governments, businesses and development agencies can really no longer afford to stay out of a new space where dialogue will increasingly be taking place,” said Mark Flanagan, Portland’s partner for digital communications. 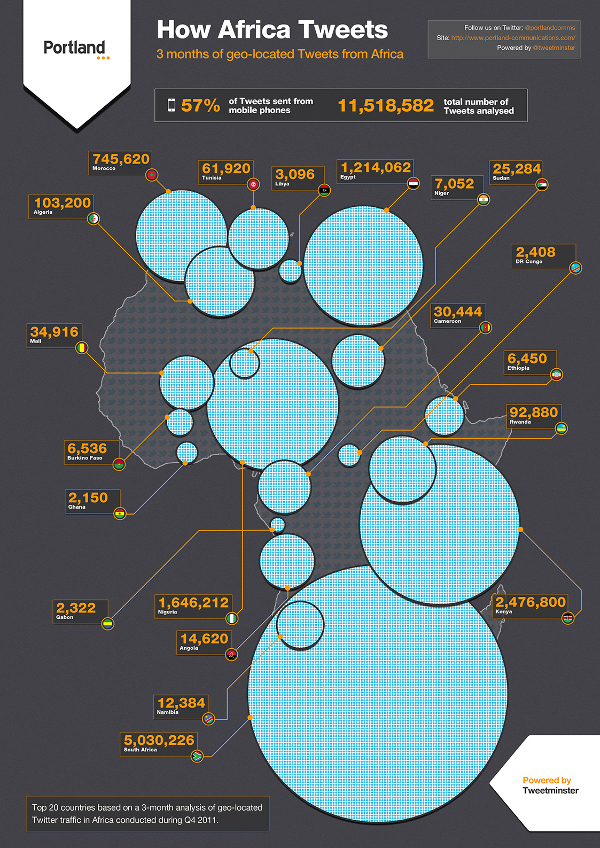