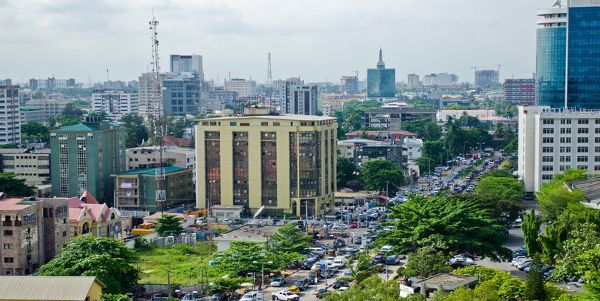 Mercer’s 2021 Cost of Living City Ranking of 400 global cities has listed N’Djamena (Chad) as the most expensive city in Africa for expatriates with Lusaka (Zambia), the least expensive. Based on the ranking, N’Djamena moved up two spots in 2021 from 15th to 13th place, while Lusaka moved from 201 to 208 in the rankings.

The rankings provide insight for multinationals on the cost of recruiting or relocating an expatriate in Africa, and also help human resources leaders to structure a remuneration package to attract the right skills for an assignment.

N’Djamena in Chad remains the most expensive city in Africa again. The Chadian economy is still recovering from pressures from a plummeting oil price, growing internal and external debts and a relatively small expat market. Despite a relatively low inflation, rentals in N’Djamena remain one of the highest on the continent. In some instances, accommodation prices are similar to what one could expect to pay in much more developed cities such New York and London. 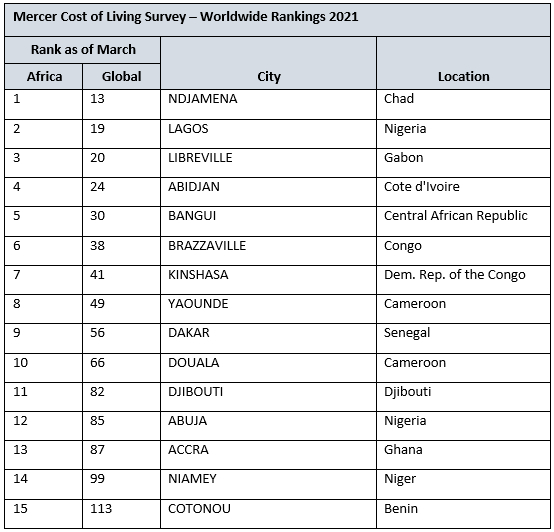 Johannesburg (184) and Cape Town (178) have become less affordable destinations in 2021 mainly due to a stronger South African rand against the US dollar. In fact, “In September 2020, the rand was trading around 17 against the US dollar as the economy was experiencing a decline in growth of 7% resulting from the impact of the pandemic. The government started implementing stricter lockdown laws, which in turn limited prospects of economic recovery and growth. Various key local sectors of the economy suffered a decline in economic activity, the worst the country has experienced in a century,” said senior associate at Mercer Africa Stevens Kawoubouga.

Nigeria showed some improvement compared to 2020. Lagos and Abuja’s ranking moved down following a depreciation of the naira against the US dollar.

In French-speaking West Africa, the most notable moves have been for cities such as Libreville (Gabon), Abidjan (Côte d’Ivoire) and Bangui (Central African Republic) jumping 13, 12 and 19 positions respectively. Even though their governments managed to control the price levels across the countries, a weaker dollar in 2020 increased the cost of living in US dollar denominated terms. In fact, the CFA franc appreciated by 10.79% against the US dollar between March 2020 and March 2021.

Interestingly, Lusaka (Zambia) is currently the cheapest city in Africa according to the latest Mercer report. Zambia has been experiencing macroeconomic challenges such as high inflation and tight liquidity. The kwacha depreciated by close to 47%, making Lusaka a more attractive destination for expatriates in 2021. Lusaka is followed by Tunis (Tunisia) and Windhoek (Namibia) as the least expensive African cities; they ranked 206 and 204, respectively.

Globally, Mercer’s 2021 Cost of Living City Ranking found Ashgabat the most expensive city for international employees, pushing Hong Kong to second place. Beirut ranked third, climbing 42 positions up the ranking as a result of a severe and extensive economic depression due to escalation of several crises — the country’s largest financial crisis, Covid-19 and the Port of Beirut explosion in 2020. Tokyo and Zurich each dropped one spot from third and fourth respectively to fourth and fifth positions, and Shanghai ranked sixth, up one place from last year. Singapore moved from fifth place to seventh.