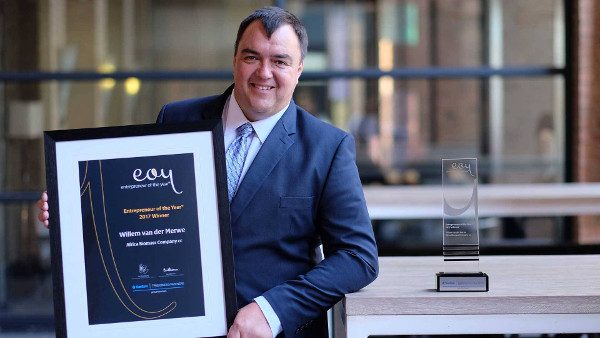 South African entrepreneur Willem van der Merwe was 10 years old when he started his first business venture – a tuck shop on his father’s farm. Years later, he went on to found Africa Biomass Company (ABC), a land-clearing and wood-chipping business that specialises in recycling waste wood. It’s the “thrill of taking risk and converting it into a value-added service” that nourishes Van der Merwe’s interest in entrepreneurship.

Launched in 2004, ABC has grown from strength to strength, and Van der Merwe was recently named South Africa’s 2017 entrepreneur of the year in a competition sponsored by Sanlam and Business Partners.

In an interview with How we made it in Africa, he highlighted his optimism about the future, given his recent achievements and because “there will always be waste wood to be dealt with”.

“If you cut down a tree that’s cultivated in a forest for the purpose of sawmilling, 50% of the volume of that tree ends up in the waste bin. A very efficient sawmilling operation will recover 52% of the actual volume of the tree into planks and the rest is going to waste,” noted Van der Merwe.

In addition, South Africa has many fruit trees which, when they get old, need to be removed and replaced. This too is an important market for ABC.

ABC started out by felling high-risk trees and offering a one-stop service to mainly fruit and nut farmers to turn their unwanted wood and plant waste into mulch (a layer of material applied to the surface of the soil as a covering).

Accomplishing this with only a hand-fed chipper, it was initially quite a small-scale operation. However, as his business grew, Van der Merwe began studying what was being done in developed countries. South African farmers were also slowly beginning to see the benefits of recycling their green waste into useable materials. Besides, the transport costs associated with dumping the waste just kept going up with the fuel price.

Eventually Van der Merwe introduced the idea of full-scale wood recycling as a standalone service, not a derivative of land clearing, to South Africa in 2008. But hand-fed chippers wouldn’t cut it anymore. He needed bigger, more technically-advanced machines to make the business economically viable.

And that’s when ABC hit its first major roadblock: these machines came with a steep price tag, and the company didn’t have the money.

“If you asked me after the first six years of business, what was my biggest challenge, I would’ve said finding finance was by far the biggest problem.”

After exhausting all traditional funding options, Van der Merwe approached a local earthmoving company, which after seeing promise in his venture, extended funds to purchase the machinery, some of which ABC still uses today.

“The big break for us came in 2008 – we had a very good market, but we couldn’t supply. And I went to a company that we are still working very closely with today and they saw the potential of this with me, and they helped me and mentored me with finance and management to get this onto the next level,” he recounted.

ABC today produces 200,000 tonnes of wood chips a year. About 90% of it is used for mulch, with the remainder used for energy purposes as a substitute for burning coal.

ABC has built and patented a number of machines designed specifically for wood waste, cementing its spot in South Africa as one of the few specialists in this industry. The company is also the exclusive Africa agent for US-based Bandit Industries – a manufacturer of biomass recycling equipment – and acts as a dealer for the multinational throughout southern Africa.

In retrospect, Van der Merwe highlighted one key concept that helped him along the way. “If I look back over the 14 years today – the most important thing is setting the right goal. You never achieve more than what you aim for… Before you move anything, do anything or acquire anything, first of all know what you want to do and then only start the execution of it,” he remarked.

The importance of high-quality resources

Van der Merwe admits that in the company’s early days, inferior resources – including equipment and staff – were the cause of considerable problems.

“The first five years of this business I bought and used the wrong equipment, and that has set me back I would say about five years. So quality of equipment in our trade is of extreme importance.

“And secondly the people that work with the equipment are equally or even more important. If you don’t have people that can make quality decisions, you cannot have a quality outcome.” To find the right employees, Van der Merwe recommends a dedicated HR team.

“I’ve only fairly recently learnt the better way of doing that – I would say in the last four, five years. Initially you take whoever walks into your door and you try to convert him to the person you want him to be. That is not the right thing to do. And it definitely didn’t work for me in many cases.

“So today we have a focused team of people that finds and sources the right character that we can employ in our business. The success of your business, in my opinion, will never be better than the quality of the people that you employ.”