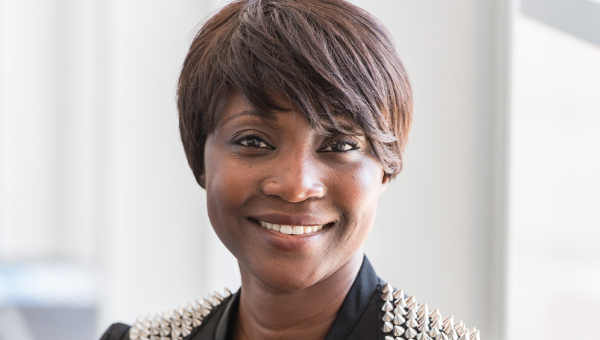 Tiguidanke Camara is the founder of Tigui Mining Group (TMG), the only woman-owned mining company in Guinea.

“I think I bring some fresh air to the mining business,” said Guinea-born Tiguidanke Camara on the sidelines of the 2016 Investing in African Mining Indaba in Cape Town this month.

The event, attended by thousands of mining executives from across the globe, is generally characterised by suits and ties – representing an industry mostly headed by middle-aged men. But Camara stands out. Not only is she one of the youngest mining executives in Africa, but she is also the only woman in Guinea to own a mining company, and one of the few in the industry.

She runs Tigui Mining Group (TMG) a company involved in mostly mining and agriculture operations in West Africa. Its subsidiary, Camara Diamond & Gold Trading Network, owns mining licences in gold, diamond and associated minerals spanning 356km² in Guinea. These include five semi-industrial gold exploitation licences on the Birimian Belt in the northeast of the country, and three exploration licenses along the Guinean Diamond Triangle in the southeast. The group has also launched a gold prospection project in Côte d’Ivoire.

Camara is the daughter of Mohamed Mounir Camara, a long-standing politician and former governor. She was raised in Guinea till the age of 14, before moving to Morocco where she pursued a degree in business management. She modelled while studying, but decided to take it up full-time when she moved to the US in 1996 after completing her education. Camara was discovered in New York by Hilory Beckford, the mother of supermodel Tyson Beckford, who became her agent, and Camara’s career quickly took off with features in a number of well-known magazines, including GQ and Marie Claire.

A lot of her work involved modelling jewellery and Camara soon discovered many of the jewels she was showcasing came from Africa – even her home country. She started speaking to some of the importers and learnt that one had his own mining licence in Guinea.

“Then I started asking questions,” recalled Camara. “I thought, ‘If he could do it, I could do it.’ He is not even from Africa or Guinea, but he has been successful at doing this. Being a native, why can’t I also be successful?”

Armed with this thought, she started saving towards opening her own mining company in Guinea. Her plans were temporarily shelved in 2001 when she had twins and decided to focus on motherhood, but in 2009 she returned to Guinea and started speaking to geologists. Once advised on where best to mine gold and diamonds, she set up Camara Diamond & Gold Trading Network to attain licences.

“No one has just started a business where everything has gone smoothly. You will have your moments of hardship.”

Camara’s business has had a number of setbacks. Her first was with a business partner who ended up embezzling a lot of the company’s funds in the first year – during a time when capital was already scarce due to a global recession.

“I had to start all over again with looking for another investor, more funds, and so forth… But I got lucky and found a partner that came in, believed in me, and he is still my partner today.”

She also set up her business during a time of political turmoil in Guinea. The country had just undergone a coup, and 2009 was characterised by violent protests and civil unrest.

“My country went through a big transition… but democracy finally came in 2010 when we elected our president, Alpha Condé. And then things started to stabilise.”

However, it wasn’t long before Guinea was hit by the Ebola crisis, which began in December 2013 and continued for around two years.

“It shut down the economy and affected everybody – small companies, big companies, and me being between the two worlds. I had to actually slow down and stop my activities in Guinea because I wouldn’t take the risk of sending people in while there is Ebola,” Camara explained.

“But thank God everything has gone back to normal. We re-elected the president again, so we are now politically stable and, health wise, there is no more Ebola. We are now going back to continue where we left off with our exploration projects. So hopefully, if everything goes well, in the next six months we will be able to start getting something out [of the ground]… And finally we have found investors… So the funds are now in place.”

While low global commodity prices poses yet another challenge for her business, Camara believes that it also offers opportunities in terms of mining deals and acquiring assets.

She added that Guinea’s mining sector is also seeing improvements. While infrastructure and electricity shortages have created a challenging business environment in the mineral-rich nation, Camara said the government is taking steps to improve its industries and encourage foreign investment.

“We are focusing on infrastructure now, working on our energy problems, and have advanced in our mining laws. Every day we are trying to find better ways of making the functioning of the mining system way easier,” she continued.

“And the government is also willing to work hand-in-hand with investors in order to develop this sector.”

Camara argues that being a woman – as well as a former model – has come with both challenges and opportunities in the male-dominated mining sector. On the one hand, there have been times when she had to work harder than most to be taken seriously. But being the exception to the rule also helps Camara stand out in the industry.

“In the beginning the fashion [part of my career] worked a little bit against me. But it is no longer a problem because I have educated myself and been persistent. So people now respect me as a businesswoman.”

She owes any success to her ability to ask questions and educate herself. “It doesn’t matter if you are a man or a woman; if you don’t have the right type of education, professionalism and drive… you will not succeed.”

Camara added her industry is typically full of “white-collar bandits”, and advises other Africans looking to enter the space to follow their gut when it comes to taking on partners.

“For example if I am asking for US$5m, and someone says they will give $30m… Then for me that is a red flag; there is something behind that. Why give me more than I ask? So you just have to follow your gut and be level-headed and focused on your goal,” she advises.

“My goal is to develop my businesses in the right manner, following the rules. I am not in a hurry to grow. I want to grow slowly, but surely, when I have solid foundations.”