Mobile money and mobile banking are increasingly proving to be the ideal channels to access cash in Africa, which is evidence of the growth that South Africa’s First National Bank (FNB) is seeing in its subsidiaries on the rest of the continent. How we made it in Africa interviewed Danny Zandamela, CEO of FNB Africa who says that the bank is seeing a rapid uptake of mobile banking in the continent. 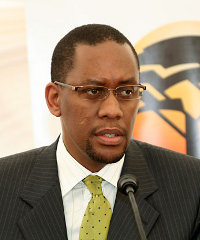 What growth have you recorded in the African countries in which you have a footprint?

We have recorded year on year growth of 376% in Zambia, 277% in Botswana; 204% in Namibia and 473% in Swaziland. When we introduced our Cellphone Banking solution into other African countries, sceptics were not convinced by this channel as being a successful financial offering. However, the numbers we are seeing are confirmation that the African continent is actually an ideal market for mobile banking services. Together the four countries perform in the region of 1.2 million mobile banking transactions per month, worth approximately R122 million (US$18 million) and have processed more than R1.2 billion ($179 million) in the last year.

In which of these countries have you seen the greatest success?

In markets other than South Africa, Botswana currently takes the lead, recording the highest number of Cellphone Banking users, with 65% of FNB customers in the country using the service. Botswana is followed by Namibia and Zambia at 47% and Swaziland with 11%.

How have you seen the growth in mobile banking translate into the remittance space?

Since launching our mobile money transfer service, eWallet, outside of South Africa, we have seen rapid growth in the remittance space. In November 2010 the bank launched eWallet in Botswana and to date has recorded over 89,000 transactions amounting to R31 million ($4.6 million) within the country’s borders. The need to transfer money quickly and safely from one person to another is and has always been important in emerging economies, and we are glad to be in a position where we are helping people with a financial offering in this way.

How do you plan on expanding into the rest of Africa?

The success of eWallet in Botswana has resulted in plans to roll out the solution in other African subsidiaries in the near future. By adding Cellphone Banking to Lesotho in May, FNB has expanded its footprint to five countries that can offer their customers the service. Mobile money services offer an inexpensive and convenient method to bridge the gap between the banked and unbanked. The African continent, by pure virtue of being one of the fastest growing mobile phone markets in the world, is the ideal environment for such innovation and it is with this that we coupled Cellphone Banking and eWallet services into our African expansion portfolio.