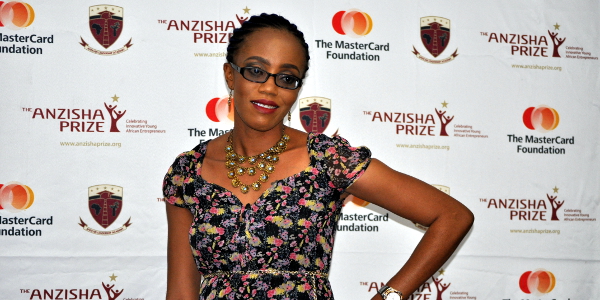 Nigerian Blessing Kwomo (20) has always been a problem-solver. From a young age she had an aptitude for maths, to the point that she’d sometimes correct teachers at school. She could have been an engineer, like her father hoped she would be, but her passion took her another direction. She wanted to help solve health problems facing lower-income households.

In Nigeria, typhoid fever, cholera and TB are just some of the diseases afflicting poorer communities. Kwomo recalls how she had contracted typhoid fever as a young child and, after being discharged from hospital, was often re-infected at home. She discovered many of these illnesses could have been prevented through basic healthcare understanding and a sanitary living environment – such as washing hands frequently and boiling water before drinking and cooking.

“And as I grew up, I started seeing people I knew face these problems too, and wondered what I could do to help them.”

The problems led to a passion for medicine and after school she opted to become a nurse. However, during her first year of studying in Port Harcourt she realised a number of the ailments her patients faced could not be solved in the hospital, and she witnessed many return soon after being discharged.

Prevention is better than cure

Kwomo began offering home consultations to find out if there was any part of a patient’s living environment that was causing them to get sick.

“So if it is dirty water or maybe an [unhygienic] toilet, then I could tell the person this is the cause of the problem – and if they try to heal in this environment, the sickness will return,” she explains.

She also started suggesting natural remedies that can boost immune systems and help patients recover, and it wasn’t long before she saw how in demand her consultations were. Not only were they more affordable than traditional medical services, but they focused on treating the cause of illness, rather than just the symptoms.

In 2014 – just after her 19th birthday – Kwomo launched De Rehoboths Therapeutic Studio, which offers a holistic approach to healthcare. In addition to offering patients a physical examination and home environment consultation, she also assists them with improving their living space.

“We go to houses and show them how to clean water. If they don’t have good toilets, we help them build one, and if they have a leaking roof that’s causing damp, we help them fix it.”

While Kwomo suggests natural supplements and immune-boosters to her clients, she notes that good healthcare typically requires a combination of both natural treatments and conventional medicine. “When handling a case from both sides, you usually get a perfect result.”

Kwomo’s business allows payments in instalments to cater to the financial realities of low-income families, but many still struggled to afford her services. To assist them and remain sustainable at the same time, she decided to work with a partner who could train unemployed women in skills such as beading and sewing, to help them earn additional revenue for their households.

The company also organises seminars on hygiene and STD education to inform communities on how to prevent common diseases.

“It is about changing lifestyles so that healthcare is more assessable, and that’s what we are doing. In Nigeria the low-income population is so underserved by the healthcare system.”

Do not procrastinate, work smart

Kwomo is married and says she has managed to juggle being a young wife, student and entrepreneur by managing her time carefully.

“It has not been easy, but my husband is supportive. When there are things I need to do, like cook, and I run out of time, he says he will handle it,” she adds. “So that is why you should marry a man who shares the same vision as you.”

She also dreams of becoming Nigeria’s minister of health one day, but for now wants to focus on growing her studio to reach more families.

Kwomo’s advice to other young entrepreneurs is to pursue what matters to them, work smart, and not let ego get in the way of honestly reflecting on failures.

“Do not procrastinate and always believe in yourself. Have self-confidence even when things are not going right. Just remember that life is a journey, and you will always get better at it.”