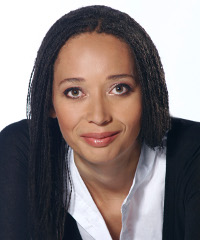 My very first job was at a market research company – we sat in a massive open plan office and had to call members of the public and ask them questions. The questionnaires were commissioned by leading brands who were trying to find out what people thought of their products.

My father – he always said that the luckiest people in the world were the ones who would do their job as a hobby. My job is something I just love doing – being able to work with our film and television industry to produce stories that mean something to our viewers whilst creating jobs and new companies is a dream job.

Trying to work out the next big thing. The media landscape is changing fast, we have to change with it and that means constantly looking at the trends and finding ways to give people new programming in new ways and on new platforms that will keep them coming back to M-Net.

Hard work, passion, having a great team of people to work with, and taking every opportunity I can.

Diversity is our strength. If we work together as one nation, the sky is the limit. I love the community spirit.

The inequality is a serious problem. I know we are a young democracy, and I plan to play my part at M-Net in creating opportunity.

I have my hands full at M-Net for the foreseeable future hopefully. I would like to be part of the transformation of the television and film industry. We need to create opportunity for young black entrepreneurship. There is abundant talent and many wonderful stories that need to be told – my job is to facilitate this process.

Believe it or not, I relax by watching television, listening to music and also playing music with my husband and my sons. We have a music room and make a lot of noise in there.

Do not be deterred, believe in your ideas, and to the businesspeople: reduce the red tape, and make it happen. The film and television industry can make significant contribution to GDP and can create jobs and new business.

Responsible leadership, long term focus as well as short term focus. Business has to work with all stakeholders to ensure a sustainable future for all.

Yolisa Phahle, currently the director for local interest channels at M-Net, has recently been appointed as the first black female CEO of M-Net, a position she will assume on April 1. Her broadcast career started at BBC World Service and in 2005 she joined the M-Net group as general manager of a leading music channel in Africa, Channel O. She has since held various leadership positions, including director of special interest channels for South Africa, and was tasked with heading the launch of the Mzansi channels. According to a recent press release by the M-Net group, Phahle’s appointment as CEO followed a decision to focus M-Net’s business on three core African markets: South Africa, West Africa and East Africa.