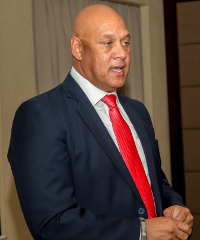 I exported fish. I was working in Cape Town with a large fishing company there. I worked there because my dad was a fisherman.

I think the [person who has had the] biggest impact on my career is probably my dad. I should tell you that he was not a well educated man, but he was a hardworking man, he was an honest man [and] he was a humble man. We come from humble beginnings as a family and so what he taught me was that it doesn’t matter what lofty heights you achieve, always be humble.

I am constantly worried about [my staff]; about what they should know that they don’t know. I know it sounds strange, but effectively, for people to reach their full potential you need to share as much information… You want them to have the best possible information so that they can perform at their peak.

Leadership. My style of leadership is something called servant leadership. It’s from the basis of trying to get the best out of people to reach their potential that excites me the most. Within a servant leadership mindset is the humility and just the sense of listening to others before acting.

I think the vibrancy [and] the diversity. [In] the last couple of years I have been quite involved in helping to reverse the effects of apartheid, for example. So, I think just the future of the country is one that I am excited about.

I think like [in] most African countries there is an infrastructure requirement: roads and traffic lights… [We need] better roads [because] when it rains there are a lot of potholes. The other thing is, from a human point of view, we have got to bridge the gap between the have and the have nots and I think technology can play a role in that.

My future career plan is to go and serve more people. So, that is either through imparting my experience, my education [and] what I have learnt in business and making sure that I can help others to be successful.

If you can be paid by somebody else and learn from that, that’s good. Being an entrepreneur is a skill that I think is in few people naturally. But I believe that the basis for entrepreneurship is experience. Work for a company is what I would say, always be thinking about the next thing and test whether you are the true entrepreneur. There are too many failures, I think, of businesses that inform me that way. Mentorship is important.

The opportunities are here. If you think again: our youth, think about the infrastructure that is being put in place and the entrepreneurs who we have talked about, people wanting to start their own small businesses. The key though, is to ensure that the youth, when they come out, have relevant education and more importantly that we can receive them into jobs that make their education meaningful. I think the way for Africa to truly realise its potential is to think globally and act locally. There is enough of a global context for reference points; what works and what doesn’t. Let’s unashamedly use that to the benefit of our countries.

Stewart van Graan is the managing director of computer technology company Dell South Africa and the general manager of Dell’s business in Southern and Central Africa. Prior to joining Dell in 2002, Van Graan spent 23 years at US-based multinational IBM in various positions, both locally and internationally.