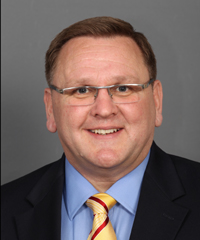 Well actually my first proper job was with DHL so I started 29 years ago and I started as a young, very attractive, slim customer service agent and in those days I didn’t have a clue what DHL was about.

In my interview [back then] I said I wanted to work overseas and DHL is the most international company in the world. So I thought [it was] a fantastic platform to go and experience life outside of my home market, which is the UK. I started there and I moved around very quickly and then I worked in various countries in Asia Pacific. Then I went to the Americas and worked in the US for five years – in a very interesting environment – and I came here two years ago.

So the contextual answer would be that I genuinely believe that you can learn huge amounts from a fantastic leader and you can learn huge amounts from a really bad leader. So you can model great behaviours from someone who you think is an effective leader but you can also model behaviours, or learn what not to do, from leaders that are perhaps not so good. I’m not so sure I’ve had one [person who has impacted my career] but most recently probably my current boss who is the global CEO of DHL Express, Ken Allen. In terms of what I think makes a whole leader, [he] has probably got the greatest strength across those sort of various dimensions.

Well I sleep very well first of all. I think I have a fantastic personal life so that’s really important – I have a good work/life balance. When I go home I sleep very well, except if I have some trouble from my young children.

But from a work perspective probably, in Africa, talent management – that’s probably the most common concern [I have]. Not so much in terms of it being a huge issue, it’s… that I don’t know that we have fully realised the potential that exists within the people that we have in the organisation, and we’ve tried really hard to do this but it’s a long road and Africa’s probably starting from a few paces back compared to first world environments. So making sure that we truly believe that tomorrow an African can sit in this chair and an African can sit in our country manager’s chair… and really do things to make sure that happens. It doesn’t keep me up from a negative perspective; it keeps me up from a positive perspective.

But on a more practical level, sort of day-to-day, I pride myself on being able to talk to one of our couriers, through to a managing director of an organisation. So I think I have a fairly genuine ability to communicate at all levels. In our environment we’ve got 3,500 people across Africa – 3,500 great people – but they really come in all shapes and sizes and to be able to connect with them, certainly from an EQ perspective (regardless of position or role) and the fact that I know that I came from there, I think it makes a massive difference. So those are probably the key reasons.

I’ve been here two, two-and-a-half years… I think from a South Africa perspective, firstly it’s a beautiful country. I mean you only have to look outside the window to see that. Every day I drive to work and I have this amazing view of either the sea or Table Mountain and we had some visitors here from overseas at DHL last week and they were just saying, “My word! What an amazing place you operate in.” And that beauty is not just mountains and oceans. It is people, it is industries, it is architecture, it is the sun, it is food, it is the eclectic mix… It’s a beautiful country and that rolls into Africa, by the way, so you can times that by 52 countries that I have the pleasure of stepping into on a regular basis. You have the dynamism of South Africa and Africa.

If you look at the potential that exists, name another place in the world, one single other place in the world, that is going through this transition that Africa is going through. There isn’t one. Asia’s been there, seen it, done it. Yes it is rapidly growing, but it is not going through this sort of embryonic stage. I’ll give you one example of this; if you spend five minutes with any one of my couriers and just listen to what they have to say and talk about their career – talk about their potential – the return you get from that, from a human perspective, is immense. Now you can’t do that in the UK, you can’t do that in America because they’ve already been there, seen it, got the t-shirt, read the book and everything else. So for me I think that’s the second bit. The first one is just sort of the general environment we operate in. The second one is from a business and industry perspective – there is this amazing wealth of opportunity that gives you instant reward every single day. So that’s fantastic.

I think what I said earlier on and I’ll try to summarise it succinctly; the sometimes failure of us not realising the potential we have. Again that’s South Africa but it’s also Africa. I see it all the time; I genuinely believe that not enough people realise the massive potential that South Africa and Africa present and so we do things, stupid things, which really damage that potential. Whether it be labour environments, whether it be strikes, whether it be letting politics getting in the way of sense – we just do things that don’t really allow South Africa to become what it can become. And again, as a foreigner looking in, that sometimes saddens me; that we’re delaying the eventuality that will happen regardless. We’re going to get to greatness, whether we like it or not. Greatness is going to come to Africa but we delay that path because we sometimes just don’t realise what we can be.

My children. I have two young children. So my great check-out is spending time with them and I love it. They get me up with a smile on my face. Even this morning my son decided he wanted to wake up at 4am and it doesn’t really bother me. I suppose you learn different things as you get older. What I have learnt over the last few years, different to how Charles Brewer was sort of 5 to 10 years ago, is that you do need to take check-out times during a day – during a week – where you just really enjoy the moment. So my hour with my son this morning was beautiful. I loved it.

Don’t worry too much about what is today. Concentrate fully on what we can be.

10. And how can Africa realise its full potential?

I would suggest collectively – whether you’re in government, whether you’re in business, a student, a mother, a teacher, whatever it may be – it is really being focused on what we can be. Don’t let the stuff that others put in the way drag and slow us down. Focus on trying to move this region forward, and do so with passion and humility, and I think we’ll realise great things.