Gonjetso Chinyama is a young entrepreneur based in Malawi. His advice to other budding entrepreneurs is to not be afraid of failure. 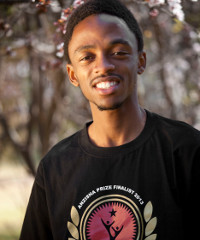 “We need to get over the fear of failure. The risk of failure is there but then you should not let that hold you back to do something, because without taking that risk you’re always going to stay at a certain level, you’re never going to move forward.”

At the age of 21, Chinyama is the founder of Pakwathu, a website that allows users to search for properties – from houses to farmland – in Malawi. Chinyama, a final year Management Information Systems student, is also the founder of design and marketing agency Twenty2 Creative. This year he was one of the 12 finalists in The Anzisha Prize, a youth entrepreneurship competition.

Chinyama says he started Pakwathu to address the difficulties people experience in searching for properties in Malawi.

“The only places you can find property in Malawi is in the newspapers, which is two to three pages of these very expensive properties and they’re just based in the [major] cities. So if you’re moving anywhere outside the three main cities in Malawi you’re quite literally stuck and you have nowhere else to go so you have to spend hours, you even have to travel there and just look around.”

This demand for property outside of Malawi’s three main cities – Blantyre, Lilongwe and Mzuzu – is partly driven by new investments in mining and agriculture. This is a trend seen across the continent where small towns are growing in prominence on the back of new resource discoveries.

“What’s happening in Malawi is that a lot of foreign investment is happening outside the major cities. So you find a lot of people are being posted there and there’s no proper information about… where they can live. So we came in to fill that need.”

The site generates revenue by charging sellers a fee to list their properties. However, those offering properties to let can promote them for free.

Pakwathu was started at the beginning of 2013, and there are currently four people working for the business.

Chinyama says the biggest challenge the business faces is a lack of understanding about how to use the platform. Despite the growth of internet in many African countries, penetration levels are still relatively low.

He says many people are not used to the concept of searching for properties online. “So the actual understanding of how the product works is taking a while for people to actually grasp because they’re just used to looking for properties in the paper.”

Chinyama says Pakwathu also needs to increase the number of properties listed on the website.

Being an Anzisha Prize finalist has helped lift the profile of Chinyama’s companies. The local Malawian press has also picked up on his achievements.

“You find people calling you up to attend seminars, to talk to them, kids from colleges asking to do interviews for their assignments. So all this was simply because of the Anzisha Prize. So it’s helped to spread the word,” he explains.

Chinyama says there are few successful internet-based companies in Malawi, creating a relatively lonely environment for entrepreneurs such as himself. “A lot of the developers are simply not skilled on the entrepreneurial side. They have the skills to create all this stuff, but they don’t have the vision to create a venture out of it… So it’s very challenging to get advice, mentorship or help.”

With just over 1,000 visitors a month, Pakwathu still has some way to go. However, Chinyama believes internet usage in Malawi is set to see rapid growth, which will benefit his business. “Entrepreneurs shouldn’t just focus on the now, but they should also see the future potential, where it could go.”