In June 2010 consultancy company McKinsey released its Lions on the move: The progress and potential of African economies report that predicted by 2020 there will be more than 128m households in Africa with discretionary income (more than US$5,000 a year). 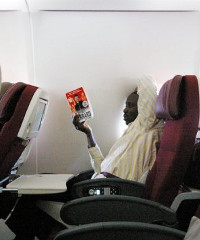 A new report by Standard Bank challenges some commonly held perceptions about the size of Africa’s middle class.

The following year the African Development Bank (AfDB) came out with a study, The Middle of the Pyramid: Dynamics of the Middle Class in Africa, that put Africa’s middle class at about 350m, or 34% of the population. The report defined the middle class as those with a daily consumption of $2-$20.

These two influential reports have played an important role in shaping current discussions about Africa’s economic progress, and they have undoubtedly been the motivation behind some investment decisions.

Freemantle’s study is based on South Africa’s Living Standards Measure (LSM) methodology that groups people on a scale from 1 to 10 according to their living standards using criteria such as ownership of cars and major appliances. Those that are LSM 5 and above (roughly consumption of more than $5,500 per year) can be considered as middle class.

Freemantle says that in a typical African middle-class home the heads of the household are employed on either a full-time or at least a part-time basis, and twice as likely as the national average to have a tertiary education. Over 95% of middle-class households are likely to have a television, and they make frequent use of formal supermarkets as opposed to informal markets. Double the national average also regularly use the internet, whether on a PC or mobile device.

Below are the main takeaways from the report.

1. Size of Africa’s middle class has been overblown

Freemantle found that in the 11 surveyed countries there are just over 15m middle-class households, much lower than the figure suggested in the AfDB report.

However, Freemantle says it is not his intention to undermine the optimism about the continent’s progress. “In providing a more definitely measured account of the continent’s consumer potential, this report, we hope, has added depth and inspiration to the reality of Africa’s ongoing development,” he explains.

Although its size might have been exaggerated, business people can take comfort in the fact that Africa’s middle class is undeniably rising.

Since 2000 the number of middle-class households in the 11 focus countries have surged from 4.6m to almost 15m today. This number is expected to grow to over 40m by 2030.

The vast majority of Africans continue to live on or below the poverty line (measured as those with daily income of $2 or less). Of the almost 110m households in the 11 countries, 86% fall in the low-income band with daily consumption of under $15.

There is however differences between countries. In Ethiopia, for example, some 88% of the country’s 90m population live on $2 or less per day; while in Angola ‘only’ 54% fall within this category.

“No country represents the scale of income ascent in Africa as clearly as Nigeria,” says Freemantle.

Nigeria’s middle class currently stands at just over 8m households, and by 2030 Africa’s largest economy is anticipated to have 21m middle-class households.

Freemantle describes the high percentage of low-income households in East Africa as “concerning”.

In Kenya – the region’s go-to country from a foreign investment perspective – 92% of households fall within the low-income bracket. This figure is even higher in Ethiopia (99%), Tanzania (97%) and Uganda (96%).

“Quite clearly, East African economies, which are experiencing some of the most rapid population growth rates in the world, are struggling to ensure the pace of income advance is commensurate with demographic change,” states the report.