Rural people in several parts of Cameroon are protesting a government policy that allows the government to sell or lease vast parcels of arable land to foreign investors. 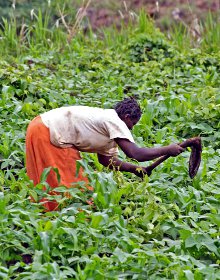 Many Cameroonians are unhappy about the leasing of arable land to foreign investors.

Supporters say the deals could bring much-needed investment to agriculture. But critics warn that the policy could lead to more subsistence farmers losing their lands – their only source of food and income.

A traditional chief in Bafang – some 200 kilometres north of Cameroon’s economic capital, Douala – decided to lease a parcel of farmland about 15 kilometers square to an Italian NGO. But the plan backfired. Local inhabitants call the deal “unilateral” and “shady” and say that it will eventually deprive them of their farmlands without compensation.

The Bafang incident is not isolated. Similar tensions have arisen in other parts of the country – for instance, in Nanga Eboko, northeast of the capital, Yaounde; and Kribi, on the edge of the Atlantic Ocean. In those areas Chinese agro-industry companies are gaining access to massive swaths of arable land. Elsewhere, irate groups have set up roadblocks to demand transparency in the land sales, which are usually conducted behind closed doors.

Government supporters welcome the initiative, saying most farmers lack the means to mechanize agriculture on a large scale. In Cameroon, over 72,000 square kilometers are available for farming, yet only a fraction is being cultivated.

A man who refused to reveal his identity says the land deals could attract investment to rural areas. He says they represent a huge contribution to the fight against poverty because the incoming multinationals will set up industrial-scale plantations, create new jobs and ensure food security in the country by selling their produce on the national market. He says the policy will reduce heavy imports of rice and other foodstuffs.

But critics say the farmland deals are generating fear and a nationalist backlash.

In Nanga-Eboko, a Chinese multinational called Sino-Cam has obtained a 99-year lease on a huge tract of productive land. The company specialises in the production and commercialisation of rice, maize, cassava, fruits and vegetables. Fuming inhabitants say they had been told the company would hire local employees and sell its produce on the domestic market.

But a lobby on behalf of local farmers, The Association for the Defense of Collective Interests (ACDIC), says all of the company’s permanent staffers are Chinese. It says young Cameroonians recruited as temporary employees earn US$2, working 10 hours per day to grow food that is exported.

Guy Parfait Songue is a political science lecturer at the University of Douala. He’s the main speaker at ongoing public debates on the new scramble for African farmlands organised by ACDIC. He says the shortsighted policy will eventually plunge the country into chaos. “Our government needs to see exactly what our population needs in the future. Our generation does not yet see the problem but I think that the next generation [will face very serious problems] that we need to prevent now,” he says.

The sale of farmland to foreigners, a fairly recent practice, is not specific to Cameroon. Observers say it’s rooted in the global food crisis of 2007 and 2008 that sparked sharp hikes in food prices worldwide. The UN’s Food and Agricultural Organisation says these sales increased because of pressure from growing populations, particularly in Asia, and because of climate change.

As a result Tanzania, Mali, Zambia, Ethiopia, the DRC, Sudan, Kenya, Madagascar and many other countries with cheap and under-utilised fertile farmland are attracting investors from wealthier countries like China, India, South Korea, Saudi Arabia and Qatar. The African Union warns that the huge land deals can exploit Africans, who have a weaker bargaining position.

The ACDIC says the land transactions are contracted in secret and include a neo-colonial element. Jacob Kotcho is the association’s permanent secretary.

ACDIC is calling on the government to rethink its agriculture development policies designed to attract nationals, especially by encouraging subsidies for local investment and easing access to loans. Nearly 70% of Cameroon’s 18 million people depend on farming for their food and income.

The association says the demonstrations against the land deals in Cameroon are a reminder of events in Madagascar. A popular uprising there overthrew the former government, which had planned to cede over one million hectares of arable land led to foreign interests. – VOA