Growing up in rural Kenya, Ken Oyaya was actively involved in helping his mother run her part-time tailoring business. By the time he was in high school, Oyaya was convinced that entrepreneurship would be his chosen career. 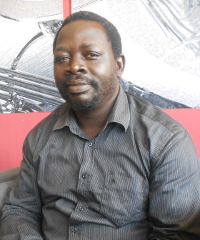 When he started university, Oyaya changed from the engineering course to which he had been admitted and instead studied business management. For the next four years, he dabbled in almost every kind of business. His first, at age 21, was distributing paintings made in India to hawkers in Nairobi.

“I saw the potential in business at a young age. My mum was a teacher but she was making more money from business,” says the founder and CEO of Blackrose Limited.

Although he later joined the workforce and was employed at East African Breweries Limited (EABL) for seven years, Oyaya’s interest in entrepreneurship never faded.

In 2011, Oyaya quit his well-paying job shortly after being promoted to a managerial position to start his own business in the entertainment industry.

“I have always had a passion for events. Even in university I was a hustler: showing movies, hiring out sound equipment, organising birthday parties and even renting out pay TV to other houses,” says Oyaya. “But when I decided to start my own business I did not want to continue hustling. I wanted something more formal and organised. I decided to open a club first.”

In the last two and a half years, he has started about a half a dozen businesses in the entertainment, retail and construction sectors under his company Blackrose. Oyaya owns five clubs and restaurants, a DJ outfit, a furniture manufacturing firm and an interior design company.

Oyaya says he chooses to empower his 12 managers to run the businesses and devotes his time to coming up with new ideas. He argues that micromanaging a business can stifle growth and limit its expansion.

“If you never give the people you employ ownership, you will never make money. When I go to my clubs the waiters don’t even know I am the owner because the managers are in charge of everything from hiring to stocking. That gives me the time to do other things, innovate and start new businesses. Giving people responsibilities and giving them room to execute is something I learnt at EABL.”

Looking back, Oyaya says he is glad he followed his passion for business. However, making that step to quit his job was not an easy one.

“I was in charge of events at EABL and I had been thinking about starting my own business, but I always felt that I wasn’t ready.”

At the time, Oyaya’s wife was enrolled in university, they were building their home, his children were going to an expensive private school and he had just bought his wife a new car on loan.

“The thing I worried about the most was losing the medical cover my family enjoyed. I was scared. I was praying that no one would get sick after I quit my job,” says Oyaya, adding that he finally took out medical cover for his family and all his employees five months ago.

The 35-year-old entrepreneur explains that after quitting his job, he went through a stage of confusion, finding himself free all day and even began applying for employment. It took him six months to make his first cheque running his own business.

“I was getting very worried. I was now thinking of things I could sell to get by. It was very hard. The reason why it took me so long to settle was because licensing a business in Kenya takes so long. There were so many licences we needed and no one advised us. There is a cartel that harasses entrepreneurs and takes full advantage of their lack of information.”