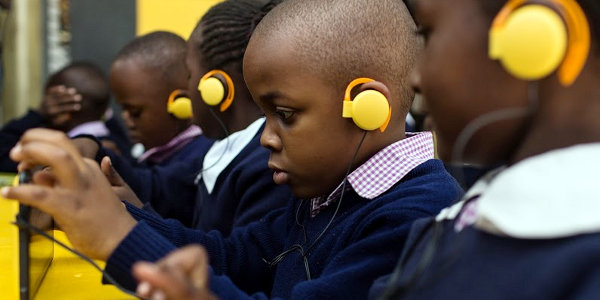 Education stakeholders globally have been pushing the use of digital content, which promises to make learning easier and more interactive. In Kenya, the government recently launched digital content comprising exercises and quizzes in the format of animations, videos, and audio clips. Local companies, such as eKitabu and eLimu, have been developing digital educational content for years now.

But low-quality devices that easily break down have been a challenge for those trying to get digital content into the hands of learners.

Kenyan technology company BRCK is seeking to solve this challenge. It has designed a “digital classroom in a box”, called the Kio Kit. Each unit houses 40 tablets and an internet connectivity device. Since its launch in September, about 40 Kio Kits have been deployed to schools in Kenya and Tanzania. One kit costs US$5,000.

The Kio Kit is the second product launched by the Nairobi-headquartered BRCK. In July 2014 it unveiled a locally-designed mobile Wi-Fi device, also named BRCK, which functions as “a router, a battery and a modem all in one”. 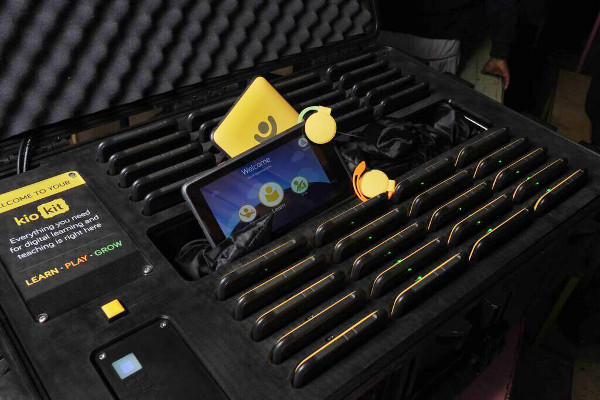 The Kio Kit comprises 40 Kio tablets, a Wi-Fi router and wireless tablet charging. There is a single plug to charge the kit and one button to switch on the entire system.

Nivi Sharma is president of BRCK Education. Before she joined BRCK, she founded eLimu, providing learners with revision materials incorporating animations, videos, songs and games. Her experiences influenced some of the design elements of the Kio Kit.

She says cheap tablets from China don’t last very long, while high-quality devices from the US are not designed for “the rugged needs we have in Africa”.

With its Kio tablet, BRCK sought to design a device that fits the African environment, with limited power, poor internet connectivity and dust. The seven-inch Kio tablet is designed for harsh environments. It can survive being dropped onto a concrete floor from 70cm, allows occasional water spills and exposure to dust, and has a scratch resistant screen coating and rubber outer shell.

“Dust was the number one factor that tablets from the US are not built for,” says Sharma.

The Kio tablet has a battery life of up to eight hours. The designers decided to do away with cameras, Bluetooth and charging ports, which Sharma says is a common breakage point for devices used by children. Instead they introduced wireless charging.

All 40 tablets fit into a lockable case. The entire system can be powered by the press of a button.

“The whole kit is designed with the teacher and student in mind. For example, we designed headphones that go over the ears, not inside, so kids would not be exchanging ear infections. Throughout the kit we have paid attention to little things,” says Sharma.

The tablets feature web-based content and cached videos from local providers such as Kenya’s eLimu and Tanzania’s Ubongo Media, as well as international institutions like TED-Ed and Khan Academy. 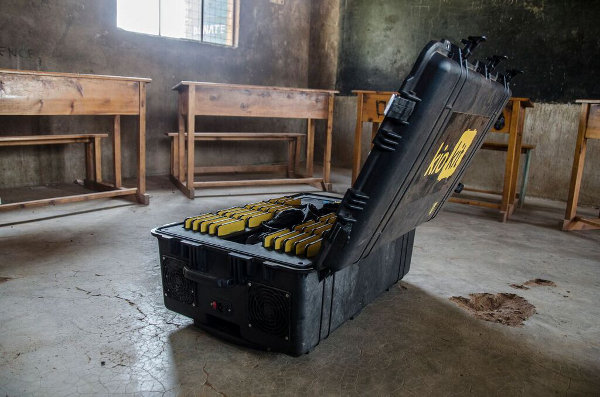 All the equipment is housed in a hardened, waterproof, lockable case

Although e-learning is touted to have many benefits, there are always concerns that teachers are ill-equipped to use digital resources, with some lacking even basic computer skills. But Sharma says it is not that hard to figure out the Kio Kit.

“We always start our installation by asking people to raise their hand if they have ever gone to training for Facebook, Gmail or M-Pesa. And people will say: ‘You don’t need training, you just figure it out’. In Kenya we are currently at a stage where we are doing a bit of digital literacy training but to be honest, it is 20% technical – how to switch on, access content, navigate the different sections. Some 80% of the training is just socialising teachers into thinking differently about their approach to teaching and learning.”

“Students on average take about three minutes to figure things out. So we tell the teachers not to worry because the kids are going to figure it out.”

According to Sharma, the industry is still dependent on donor funding. Public schools, even those that are interested in innovations such as the Kio Kit, have limited access to funding. However, she says there is growing interest in the opportunities to monetise educational technology. BRCK Education is a “few months away” from breaking even.

“I think [sales] will pick up in June. A lot of private schools are waiting to see what will happen with the public sector and then give a response that is equal or better than what the government does,” says Sharma.

BRCK Education is currently deploying one kit a week, but the target is 50 to 100 a week.

“The trend we are seeing is parents, schools and teachers want this in the hands of learners. So the demand is there. We are streamlining our processes because if an installation takes half a day every time, we are not going to get there unless we hire large numbers of staff.

“We want to make it as easy as possible to deploy, because we know the demand is there.”