An apparent surge in the purchase of African land by foreign companies and governments to grow food and other crops for export has set alarm bells ringing on and off the continent. The headlines have been strident: “The Second Scramble for Africa Starts”, “Quest for Food Security Breeds Neo-Colonists”, “Food Security or Economic Slavery?” 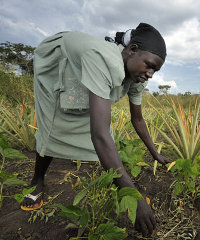 A South Sudanese woman works in a field of a co-operative farming project.

The outcries reflect the continuing impact of the continent’s history, when as recently as the last century colonial powers and foreign settler populations arbitrarily seized African land and displaced those who lived on it, lending considerable emotion to the current volatile issue. Some agricultural experts have wondered whether such land deals could lead to a form of “neo-colonialism”. But immediate, practical concerns are also prominent. “This is a worrisome trend,” noted Akinwumi Adesina, the then vice president of the advocacy group Alliance for a Green Revolution in Africa (AGRA). Such foreign land acquisitions, he argued, have the potential to hurt domestic efforts to raise food production and could limit broad-based economic growth. Many deals have little oversight, transparency or regulation, have no environmental safeguards and fail to protect smallholder farmers from losing their customary rights to use land, added Adesina, now Nigeria’s minister for agriculture.

The sheer size of some of the land agreements has added to the alarm. A deal to allow South Korea’s Daewoo Corporation to lease 1.3m hectares was a key factor in building support for the ouster of Madagascar’s President Marc Ravalomanana in March 2009. In Kenya the government struggled to overcome local opposition to a proposal to give Qatar and others rights over some 40,000 hectares in the Tana River Valley in return for building a deep-sea port.

A number of international organisations reacted to this development. The Food and Agriculture Organisation (FAO) and the World Bank commissioned studies into so-called land grabs. At the 2009 summit of the Group of Eight (G8) industrialised countries in Italy, Japan pushed for a code of conduct to govern such schemes. Any code of conduct is going to be difficult to negotiate, and it will be even more difficult for industrialised countries to apply to deals that are primarily worked out between countries in the south, the United Nation’s (UN’s) Special Rapporteur on the right to food, Olivier De Schutter, told Africa Renewal.

In a report titled Large-scale land acquisitions and leases, De Schutter wrote that while such investments provide certain development opportunities, they also represent a threat to food security and other core human rights. “The stakes are huge,” he said. Unfortunately, “the deals as they have been concluded up to now are very meagre as far as the obligations of the investors are concerned”. He also noted that agreements concerning thousands of hectares of farmland are sometimes just three or four pages long.

Yet for African countries agreeing to such deals, the possible advantages are also attractive. While African agriculture rarely attracts significant investments or external aid – and the current global economic downturn has made external financing even scarcer – leasing unused land to foreign governments and companies for large-scale cultivation can seem like a way to boost an underdeveloped sector and create new job opportunities.

A study by the International Institute for Environment and Development (IIED), a research group based in the UK, estimated that nearly 2.5m hectares of African farmland had been allocated to foreign-owned entities between 2004 and 2009 in just five countries (Ethiopia, Ghana, Madagascar, Mali and Sudan) it studied in depth. The sheer scale of many leases is unprecedented, said the IIED report, Land grab or development opportunity? which was prepared for the FAO and the UN’s International Fund for Agricultural Development.

The surge in interest in African land has been driven by a number of factors. On the side of investors, those include a desire for food security back home and to a lesser extent rising demand for biofuels. Behind both is the expectation of rising costs of land and water as world demand for food and other crops continues to expand.

Many of the government-to-government deals are aimed at meeting food needs, especially in the states of the Arab Gulf and in South Korea. Indian companies, backed in part by their government, have invested millions of dollars in Ethiopia to meet rising domestic food and animal feed demand. Commercial enterprises, many of them European, as well as Chinese companies, have been in the lead in cultivating jatropha, sorghum and other biofuels in countries such as Madagascar, Mozambique and Tanzania.

Africa is a particular focus for this investment explosion because of the perception that there is plenty of cheap land and labour available, as well as a favourable climate, De Schutter points out. In Mozambique, Tanzania and Zambia, for example, only some 12% of arable land is actually cultivated.

Africa so far has been able to mobilise only limited financing to develop its arable land. Despite persistent calls for increased domestic investment, agriculture has lagged well behind other sectors. The African Union has urged governments to devote 10% of their spending to agriculture, but not many have actually met that target. Donor countries and institutions have also failed to play their part, with agriculture’s share of aid tending to fall.