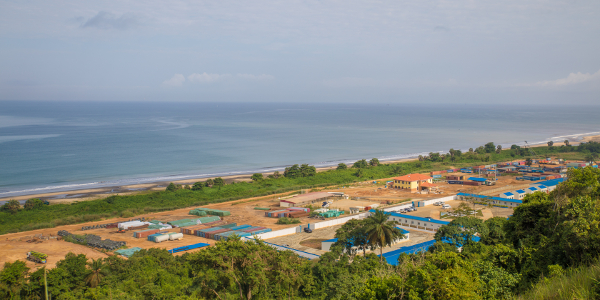 The site of the Port de Caio project.

Jean-Claude Bastos de Morais, the  founder and chairman of the Advisory Board for Quantum Global Group, talks about the Port de Caio project (POC), how it will benefit the surrounding community and Angola as a whole, and his involvement in it as a majority shareholder.

How long has the POC project been going on for?

The port has been under development for close to 10 years during which time the port concept was both expanded and altered to reflect current market realities. Initially, a group of promoters that included myself and other local Angolans were established to take on the crucial role of port promoter during the critical early development phases.  As the port concept developed, the state became involved in important discussions on legal and financing matters.

Broadly speaking, who are the investors in POC and what is the financing structure of the port?

The group promoting the port’s development were the initial investors of the port covering the first 10 years.  Recently, the capital has been opened to a second round of funding to Angola’s sovereign wealth fund, a long-term sub-Saharan investor. The agreed public-private partnership (PPP) model provides for a 30-year concession where the state will finance the infrastructure covering 85% of capex costs and the remaining 15% will be financed by the private investors. After 30 years, the port infrastructure will be transferred back to the state.

Adopting a PPP model, the Caio’s deep-water port is under development and is being developed in two phases over three years. The first developments of building the base infrastructure phase in the maritime area will be finished in the second half of 2017. The mooring operations for large vessels and the handling of containerised cargo at Caio’s deep-water port is expected to commence with a ‘soft’ opening at the end 2018. The second phase of finalising the initial port facilities is scheduled to be finished in 2019.

What is the rationale for the investment in POC?

Today Angola is playing an increasingly active role in the regional integration strategies of the southern African countries. In 2015, Angola signed trans-boundary agreements with the Democratic Republic of the Congo, the Republic of the Congo, Namibia and Zambia to further facilitate trade. With its strategic location, the Porto do Caio once completed, will be a major trade gateway between Angola and the rest of Africa and beyond. As a new, major gateway to international markets from the west Coast, the development will also make exports much easier and more cost-effective for national and regional manufacturers.

Porto do Caio can truly become an engine for economic growth, raising living standards and creating real opportunities for ordinary Angolans by reducing the cost of imported goods which today represent 85% of all goods in the country. By developing the port with integrated free trade and industrial zones, the Porto do Caio will act as a catalyst to economic growth and diversification, and will have impacts such as eliminating 10-16% of the unemployment in Cabinda, increase Cabinda’s GDP by 20%, and create more than 30,000 jobs directly and indirectly (including induced jobs) because of the economic free zones – which have proven to be a huge enabler of innovation and business growth in other fast-growing markets such as Dubai and Abu Dhabi. And by being integrated in to a major export and import hub, the location of the free zone represents a smart, strategic economic policy decision.

On average big infrastructure projects such as deep-sea ports take 10-15 years to complete, including planning, tendering, negotiations, environmental studies, technical studies, and construction, etc. Based on our extensive experience, we recognised that building a deep-sea, greenfield port requires significant investments in terms of time, resources and visionary commitment to ensure its long-term success. The port is making considerable development progress and is scheduled to have its base infrastructure foundations completed by the second half of 2017, which is in line with the original development schedule.

Furthermore, a project like the Porto do Caio, which comes with its own set of challenges cannot be built overnight. The selection of the right port location was a significant step which took into consideration various criteria, one of those was the total costs of construction, maintenance, and logistics, etc. The area of Caio is within shallow waters and this means a lot of dredging which is a time consuming exercise. Due to the fact that we had to relocate the first location in Caio to another location in Caio created a two-year delay.

In recognition of the enormous impact that such a large-scale infrastructure development can have, surrounding community leaders and residents were consulted so they could gain a solid understanding of the future economic potential that the port will bring to their towns and villages in terms of job creation and the opening of new trade routes.

The private sector developers of the Porto do Caio have a responsibility to their shareholders, but most importantly to the Angolan people. This is their port and their futures, and this major piece of infrastructure development belongs to them. And, in the context of major changes in the global oil and commodities markets, it was prudent that time was taken to carry out these extensive feasibility studies and conduct the appropriate amount of due diligence.

There have a series of significant milestones and some setbacks along the way, but those behind the port’s development have not lost sight of the end goal, which is to build a best in class deep-water port that acts as a catalyst for increasing economic prosperity for all stakeholders.

What brought about the changing nature of the port vis-à-vis the presidential decrees?

The construction of the Porto do Caio is not something that has appeared out of nowhere. The work that has gone into building this port so far has been carried out with a broad purpose in mind; one that is aligned with the Government’s strategy for economic diversification. After numerous feasibility studies and dramatically changing market dynamics, the overall structure of the port needed to be altered to reflect the physical nature of building a deep-water port at sea while also addressing the changing market realities. This is the standard development process when building such comprehensive infrastructure projects that have potential to directly impact trade routes. In addition, unforeseen happenings have pushed back the initial soft opening date such as the third-party container boat accident.

For Angolans, particularly the communities of Cabinda who have long be cut off from important trade routes, the potential economic opportunities that Porto de Caio will create are very real. If today the port project has created 500 jobs, in five years it will have created at least three times as much. In times of full capacity operations, the potential job creation, including the induced effect is up to 30,000 jobs. So, without doubt, Porto do Caio is going to be the cornerstone of positive change, creating new economic opportunities and much needed socio economic growth in Cabinda.

Can you provide a progress update on the port?

The first phase infrastructure base development to be completed in 2017 includes the breakwater barriers and dredging work in the maritime area. The mooring operations for large vessels and the handling of containerised cargo at Caio’s deep-water port is expected to commence with a soft opening at the end 2018. At present time our main activity and cost driver is the dredging part.

Furthermore, additional base development, which will include a 630 metres quay wall, warehouses, a power plant and a free-trade zone, will be completed in 2019.

Future development phases will see the port infrastructure extend to two kilometres long and 1200 metres wide, of which 1,130 metres will be for docking of four ships capable of carrying more than 5,000 containers each.

What are the benefits of the Port to the people of Cabinda and wider Angola?

The Porto do Caio project is anticipated to generate significant revenue and act as a key driver for both economic development and job creation. It is projected to increase trade by at least 30%, create more than 30,000 jobs – thereby reducing the unemployment rate to circa by 16% from the current level – increase international trade and commerce opportunities, grow Cabinda’s GDP by up to 20%, diversify exports through economically feasible exploration of abundant sources, and reduce logistical costs and the price of goods – and therefore cost of living –and reduce overall poverty levels.

For Angolans, particularly the communities of Cabinda, the multiplier effects of any major development are well documented, but for a major international import and export hub that is complemented by free zones, this project has enormous potential to create entirely new supply chains. Given this potential, Porto do Caio is going to be the cornerstone of positive change, creating new opportunities and providing much needed socio-economic growth in Cabinda. All Cabindians shall be able to do more with each kwanza they earn as today the cost of goods are more expensive in Cabinda than everywhere else in Angola.

A new port in the new millennium, with state-of-the-art facilities and technology will be the game-changer that we really need in Angola – a catalyst for increasing economic prosperity and rapid job creation. By introducing best-in-class facilities, free trade and industrial zones, the port will be an anchor for sustainable economic development in Cabinda and beyond. The new deep sea port of Caio will be the most efficient in west Africa.