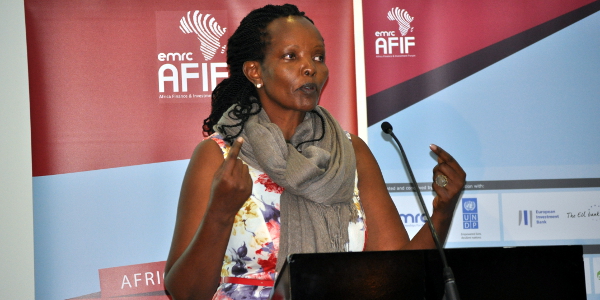 Mary Cherop Maritim is one of the four finalists for AFIF’s Entrepreneurship Award 2015.

Standing in front of a room full of investors at the 2015 Africa Finance and Investment Forum (AFIF) in Cape Town last month, Kenyan Mary Cherop Maritim shared how she started her frozen foods company.

“This business has changed my life completely,” she said. “I get emotional when I say that because I never used to be like this. Just having the confidence alone. Never before would I have stood in front of anybody like this to say anything.”

Maritim is the founder of Cherebut Foods, a company that supplies frozen grains and legumes. Today the business has its own factory, produces a tonne of food a week for seven grocery chains in Kenya and employs 11 people.

But Maritim did not start her company with the typical business plan. With a fourth form education and no business experience, she admits that she was very naive in the beginning.

Idea to reality in two weeks

She came up with her product idea in 2007, while working as a secretary for a government official. She often had to work late and this meant having to prepare supper for her family ahead of time. But one day she found herself working later than expected and with no idea what to feed her family.

“I got home and my husband and children were waiting. So I rushed to the freezer and found some beans that I had cooked, frozen, and forgotten about it. I cooked some rice really fast, made a sauce and threw in the beans – and within minutes we were sitting eating,” recalled Maritim.

“I wondered if other women knew this trick because it is really a great idea to have frozen beans around for times like this. But then I thought some might even be too busy to cook the beans in the first place and to then freeze them. And maybe this was a good business idea.”

Armed with this thought, she moved fast. She found a box of tea and read the label to see what information companies provided – from brand name, to ingredients, to net weight. Having recently lost her mother, she decided to name the company after her – Cherebut. Once she had printed a few labels, cooked her beans and maize, she then sealed them in a packet using her clothes iron, before freezing them.

The next day Maritim walked into the offices of Nakumatt, East Africa’s largest supermarket, with her products in a cooler box. She asked reception who to speak to, and was taken straight to see the retailer’s managing director, Atul Shah.

She will never forget her first meeting with him, nor how he told her to place her products – which were at that point half melted and dripping with ice – on his wooden table. But he seemed interested.

“He asked for my papers, and when I said I didn’t have any he laughed and said: ‘Madam, I require papers to do business with you.’ So I took out a pen and paper and said: ‘Sir, I have never done business in my life, what papers do I need?’ He mentioned five documents.”

After the lengthy and expensive process of registering her company and getting the required documentation, Maritim returned to Shah who agreed to try her products for 60 days in two branches.

“They took so long to sell. I remember I used to go and just look at the products, and the next time I would visit it seemed nobody had even touched them.”

But then slowly things changed, and Maritim started getting orders for larger amounts, and expanded to other branches.

“I had a fax machine… and it was how I received my orders. I remember that sound of the fax coming with a new order – I would just jump up and cheer as it printed.”

By the end of her first year, Maritim was selling to a variety of different supermarkets and grocery stalls. At the time she was still working as a secretary, but managed to employ help so she could juggle both commitments.

“There was a time when we used to work into the night, and I would tell the [employee] to go sleep while I continued until 2am. Then the next day… I would sneak from work, go deliver and quickly come back. It happened like that for a long time,” she continued.

“It took a while for me to quit because I have a phobia of being without money. Insecurity is my biggest enemy. I grew up in a family where my dad was really harsh on my mom, and I have always sworn that I will not stand that. And however little my income was, I felt as long as it is mine, let it be there.”

However, in 2010, she quit her job to focus full time on her company, and with the revenue she earned managed to go back to school and complete a degree in marketing.

In 2012 she also branched out to start producing cleaning wears, known as the Knit Wit. For years she had been knitting her own cloths to wash dishes, but realised there was space in the market to sell them when she got too busy to knit her own and went to the shop to buy one. “I couldn’t find anything that was like my product, but I bought one and really felt I’d wasted my money.”

Today she works with 23 women to produce the Knit Wits, and while the product is not a large revenue producer, Maritim has high hopes for it.

“I actually made a loss at some point, a big loss. When I was working out my margins, I didn’t know how to do the calculation. And it took some time before somebody pointed that out. When I [calculated] it properly, I realised I had lost quite a bit,” she admitted.

“Ignorance is expensive, but I have learnt… and I am more of a business person now.”

Her advice to others hoping to venture into entrepreneurship is to start small, look to address basic needs, and keep the business as uncomplicated as possible.

“Start small, don’t start big. When you start big, you are met with big challenges and they can easily knock you down. So by just starting small and growing, I was able to meet challenges I could manage. Had I started too big, I would have met challenges I did not yet measure up to.”