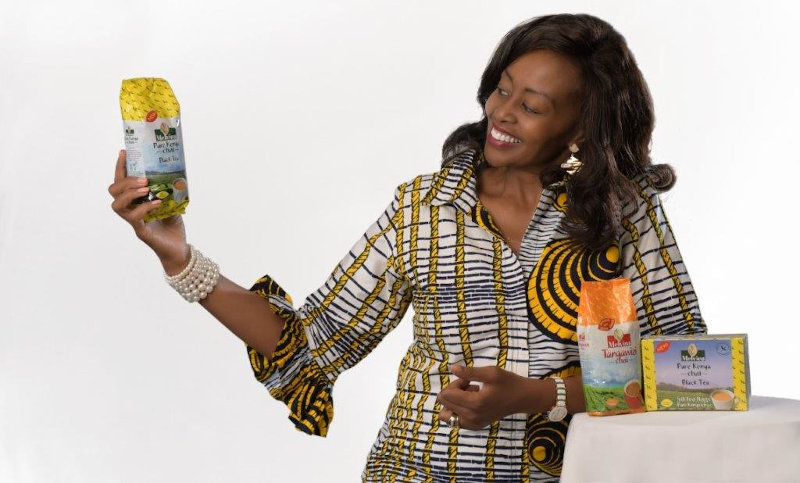 Flora Mutahi, CEO of Melvin Marsh International, grew up in a time when it was frowned upon in Kenya to become an entrepreneur.

“In the ’90s, everyone thought you should choose a profession, like a doctor or a nurse. Business was for those people unable to get careers,” she says. “Nowadays, I spend a lot of my time telling young people it is fine to do business as a first choice.”

Mutahi studied accounting simply because she was good at it and qualified as an auditor. It was a job she had no passion for and she lasted just nine months in her first role before quitting.

Her family was not happy when she broke the news but Mutahi persevered and investigated different entrepreneurship options. Her initial product was Kenya’s first free-flowing salt (with anti-caking additives) under the brand name of Melvin Marsh International before adding flavoured and infused teas under the Melvins Teas label to the inventory. Today, the company has 120 employees and its teas can be found in Kenya as well as in some regional and global markets.

Learning on the job

Mutahi admits she lacked the required knowledge and skills when she first started in business. Her attitude, however, was always that she would be able to learn what was required.

To develop and commercialise the free-flowing salt, she partnered with a lecturer at a local university. She relates that the only time she spent in a lab was in school and suddenly, here she was learning about processing salt.

Once the product was developed and she had decided on a name for the company, a friend with a design background assisted in coming up with the brand look. Some orders followed; one from a hotel which wanted 1,200 packs of salt. “It sounded like a lot but really it wasn’t,” she recalls of that first round of orders and salt’s narrow margins. “I was so green in business. When I delivered the salt to the hotel, I thought I would get paid the next day but it took them 90 days to pay.” Mutahi realised she needed another product.

In the early ’90s, Kenya Tea Packers (Ketepa) had a monopoly on tea packing (the process in which the blended tea is packed into tea bags) in the country. In 1992, the market was liberalised, allowing other players to operate. Mutahi saw this as an opportunity and a trip to Mombasa to meet with players in the tea industry followed in 1994. “These men challenged me and said: ‘You do not just wake up one morning and go against a monopoly.’”

It was good advice as she realised she needed to differentiate her product. As a tea lover, she would often purchase fresh ginger to flavour her drink. “I wondered how many other people were doing this,” she recalls. The idea for Melvins ginger tea was born and it was back to the university lab to develop the new product.

Finance and experience were major obstacles in the early days.

Mutahi had taken out a loan from a savings and credit cooperative organisation – called a Sacco loan in Kenya – but it was not enough. She remembers approaching her family for support and initially being refused.

Mutahi then found an International Finance Corporation (IFC) fund that syndicated loans through commercial banks by offering security for the loan if the applicant provided half. Her mother, behind the backs of the other family members, relented and provided the money. It was still not enough to pay for everything that was needed.

“It wasn’t illegal to bounce cheques so I would hand them out with no idea where the money was going to come from. Or I would collect only a portion of the packaging material I had ordered from a factory so they would not invoice me,” she laughs.

Fortunately, with its unique Melvins ginger tea, the company did not struggle to get listings in the bigger supermarkets and business gradually picked up. For two years, Melvins Teas sold only two tea products: the ginger-flavoured tea and a premium tea.

During this time, Mutahi had to train herself to be a tea taster (something that usually takes years at a registered tasting school) as she could not afford the services of a professional. She went into the tasting room of another tea-packing company for about three weeks to learn so that she would be able to advise on the right blends for her products.

Weekends were spent driving across the country to find new retail outlets and arranging marketing activations to promote the product.

In 1997, Melvins Tea urgently developed four more flavours to gain entry into an export promotion programme offered by a British fund. Unfortunately, says Mutahi, the programme failed because the group was taken to bulk tea buyers in the UK while they were providing packed tea. “It was pitched wrong.”

The new flavours, however, sold well in the local market and export was placed on the back-burner for a while. It was only in 2004 that the company sent its first consignment abroad, to the US. Other milestones include exporting to Japan in 2006 and more flavours being added in 2010.

From farm to teacup

Melvins Teas does not have its own tea farm. It procures tea from different areas in the country and then contracts factories to process it. “We then take our preferred blends to our factory for further processing.”

In an industry filled with competition, Melvins’ unique proposition is that it is all-natural. “We mill our ingredients from scratch and work with outgrowers for our flavours such as camomile and lemongrass; we don’t use artificial preservatives or flavourants. Our expertise is in the blending and the flavouring.”

Mutahi says there are over 300 registered packers of tea but only the first 10 on the list have meaningful volumes. Melvins Teas ranks itself third in the Kenyan market.

The lack of value-addition in the country’s tea industry bothers Mutahi. “About 95% of the tea grown here is sold and exported in bulk. My dream is to see single-origin tea packed from Melvins in stores worldwide and our journey has proudly began.”

The company recently began selling its products on its own website as well as on third-party e-commerce platforms such as Jumia. Export markets now include Rwanda and Melvin Marsh has its sights set on West Africa. There is also interest from a company in the UK that wants to sell Melvins Teas to the British market.