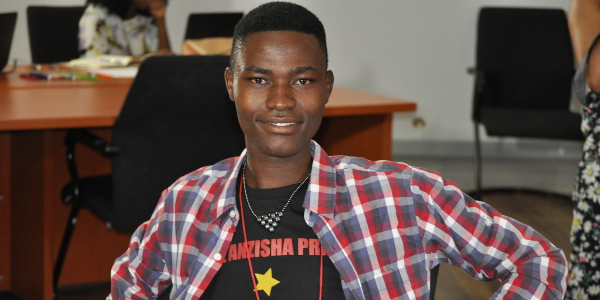 “I want to change the mindset that agriculture is only for those that do not have an education – because it is not. Agriculture is for anyone,” says Sirjeff Dennis, founder of Jefren Agrifriend Solutions.

Sirjeff Dennis was five when he witnessed a neighbour lose her seven-month-old son. Living in the slums of Tanzania’s commercial hub Dar es Salaam, the mother had spent much of her pregnancy hungry and her son was born underweight and too weak to survive his first year.

His death hit Dennis hard and created a deep passion for fighting hunger. At age 17 he started a poultry business, Jefren Agrifriend Solutions (JAS), to supply his community with affordable chicken meat and eggs. Four years later the company is producing 2,000 chickens a month and has caught the attention of the Anzisha Prize, Africa’s premier award for young entrepreneurs. Last year Dennis was named one of its 12 finalists.

Saving while others were spending

After completing high school, Dennis joined Tanzania’s compulsory national service for three months of training. “We were given around US$20 per month and other people would buy clothes, food and other stuff. But I was saving the money,” he explains.

At the end of his service, he returned with $60 and bought 50 broiler chickens, which he kept in a coop he built in his yard. He had already learnt how to raise them from previously working for a local poultry farm.

Dennis had also done well in school, and managed to get a loan to study science and petroleum chemistry at the University of Dar es Salaam. The Tanzanian government was investing in developing specialised technicians after oil and gas reserves were discovered in the country, and the loan was meant to cover the cost of studying, as well as food and basic living expenses.

But Dennis had other plans. “I was eating bread with water through breakfast, lunch and supper just to save my money so I could inject it into my company,” he recalls. “I was trying to use minimal amounts, maybe only $15 a month.”

He also reinvested profits back into the business, and it wasn’t long before he diversified his offering. He bought some layers for egg production and started selling chicken manure as fertiliser to local farmers. He later began farming vegetables, producing around 400kgs per week, and has recently branched out into maize and rice production.

And last year he managed to buy six acres of land which he plans to use to expand his poultry business.

Dennis sells his chicken broilers and eggs to informal traders who supply the community, and he estimates his produce is almost 50% cheaper than his competitors’.

One of the ways he has been able to do this is through reducing the price of chicken feed, which he says makes up around 90% of total production costs. He managed to get in contact with an agricultural laboratory in Kenya, which provided him with a formula for chicken feed that he could produce locally.

“It was almost half the price of buying feed from manufacturers. So I found my cost of production was very low and I could sell my products at lower prices and still make profit.”

His happiest moment came when he was approached by a husband and wife who said they used to go a year without eating chicken meat before Dennis started his business. Now they can have chicken meat much more frequently, says Dennis.

“To have people older than my parents thank me for this gave me inspiration to continue. It was my happiest moment.”

Be accountable to yourself

It has not all been smooth sailing. When Dennis was 18 he had to leave his chicken business in the hands of a young employee while he studied. The employee was provided with money to buy medication for 500 chicks, but instead spent it on himself and left the chickens unattended. By the time Dennis returned, all the chickens were dead.

“It was a very, very painful moment and I lost all the money that I had invested. I was left with just a small amount and I had to start all over again with 100 chickens.”

Dennis says he has now learnt how important it is to develop a team he can trust. “But, at the same time, you should make your team feel like your project is theirs too. I was actually not giving [my employees] a lot of money… When I employed the next team, I gave them a place to sleep in the house and was responsible for their meals. I also paid them a fair salary.”

One of the reasons he believes he’s been successful is because he has taken his future into his own hands.

“I own me, and so whatever happens I only have myself to blame. I don’t like complaining that the government is not doing enough or I came from a poor background and have to live a certain way. No, I own me. I am the person who is responsible to change everything for me. So I think it is all within my hands and I don’t depend on anyone else.”

He advises other young Africans to consider farming as a career, not just because it’s important for the continent’s food security and solving unemployment, but because it can also be a profitable business.

“I want to change the mindset that agriculture is only for those that do not have an education – because it is not. Agriculture is for anyone.”