Last year How we made it in Africa and real estate consultancy Terrace Africa identified Ghana’s port city Takoradi as one of Africa’s ‘boom towns’, along with Pemba (Mozambique), Solwezi (Zambia), Tete (Mozambique) and Juba (South Sudan). 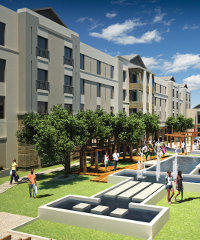 An artist’s impression of the proposed Protea Hotel in Takoradi, Ghana.

Before Ghana started with full-scale commercial oil production in 2011, Takoradi was described as a sleepy town. However, it has since risen to prominence due to the fact that it is the nearest commercial port to Ghana’s offshore oil industry.

“Takoradi, on Ghana’s western coast, is dusting off her dance shoes to get ready for the good times. The city has passed its prime and some even say it’s a ghost town. But a promised oil boom means people are blowing new life into Ghana’s main twin city,” the Accra Mail wrote in a 2010 article.

Despite Takoradi’s newfound importance, property developers and retailers have still not fully capitalised on the opportunities.

One company that has identified Takoradi’s potential is South Africa’s Protea Hospitality Group. Last week the group confirmed that it will launch a 130-room hotel in Takoradi, set to open in early 2014.

Protea CEO Arthur Gillis said in a media statement that West Africa is arguably the continent’s most exciting region from a hospitality point of view. Economies such as Ghana and Nigeria are expected to grow by more than 6% this year.

“West Africa is booming. Ghana’s economic growth is predicted to be greater than 7% in 2013, which is nothing short of miraculous in the current global climate, and Nigeria isn’t far behind,” said Gillis. “The Protea Hospitality Group has already developed a strong brand presence in Nigeria in recent years, but we’ve been looking for just the right opportunity in Ghana for some time now and I’m delighted that we’ve finally found it in Protea Hotel Select Takoradi.”

Takoradi’s deep water sea port and the fact that it is the hub of Ghana’s nascent oil industry makes it a strategically important economic development node.

Despite Protea’s optimism about the West African market, the group also sees opportunities in East Africa. “A number of countries in East Africa are also showing significant growth, despite troubled regions like Somalia and Sudan. Uganda is one of those countries with a predicated growth rate of around 5% this year, and our hotel development there underpins our belief in its political stability and growing economy,” Gillis explained.

“It’s extremely interesting to watch all these groups swooping in to bring international ‘civilisation’ to our home. In Africa, hospitality development and hotel success is not so much limited by infrastructure challenges, but rather by thinking that because you’ve built a hotel in China or Brazil, you know how to do business in Africa.”

“The Protea Hospitality Group has been working here for nearly 30 years and the first rule is always to find the best local partner possible. Partnerships are key to making it work in Africa,” he added.