African hospitality group Mangalis Management is investing £315m (US$508m) in the construction of 2,200 rooms and suites spread across 15 properties in 13 African countries. The group has launched four brands covering the economy market segment with its Seen and Seen+ hotel brands, as well as the mid-upper segment with Noom Hotels and Noom Résidences. 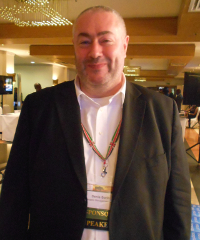 “We have a vision for Africa. We are an African group that wants to put Africa on the map,” said Sorin. Rather than being a foreign-owned hotel operating in Africa, “our idea is exactly the opposite. When you go to a Noom or Seen hotel, you will know you are in Africa.”

Sorin told How we made it in Africa that he expects Mangalis to start making a return on investment “very fast”.

“The trick is we are starting in West Africa [where] the hospitality industry is in a terrible shape. There is nothing; you have a lot of big brands but the quality is terrible. We are opening a hotel soon in Conakry [Guinea] so our colleague is staying in a famous brand there and he told us he had to wait 30 minutes for an espresso. We are coming with brand new buildings, well-trained staff and the service will be very personal and fun.”

Teyliom International entered the African hospitality market in 2009 when it opened the Radisson Blu hotel in Dakar, Senegal.

“The major problem we are having today is finding staff and training them because unfortunately, especially in western Africa, this is a big problem. We are spending a lot of money and energy to hire the best employees and also to make sure we train them to be able to handle visitors from all over the world,” said Sorin.

“There are a lot of Chinese people coming here. Are we able today in Africa to serve Chinese people? Do you know, for instance, that you cannot look at someone in the eye in China? It is forbidden because it is an insult.”

According to Sorin, over the next five years Mangalis Management will be among the five largest hotel groups in Africa with more than 40 properties. The group, headquartered in Barcelona, Spain, also plans to expand across the globe.

“We want to be everywhere in the world,” said Sorin. “Next week we will be in Paris because we have a request for Europe for [our] Seen [brand].”