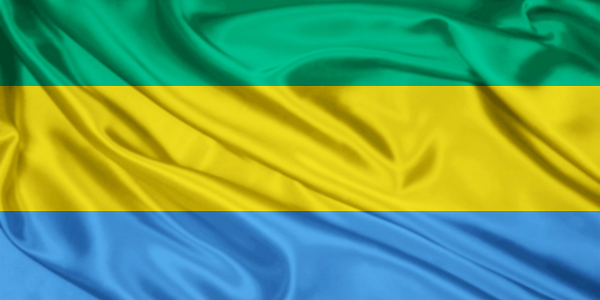 Despite headwinds from the oil sector, we expect real GDP growth to pick up in 2016 to around 5% of GDP on the back of growth in mining, agro-industry, construction and services. The economy is slowly diversifying in line with the “Emerging Gabon” strategy, although non-oil growth will be constrained by cuts in public spending. FDI is relatively high (expected at over 7% of GDP in 2015 and 2016), and actively promoted by the government e.g. through fiscal incentives for industrial activity.

Gabon enjoys one of the highest GDP per capita in the region (around US$8,000) on the back of resource wealth. However, income inequality is very high, one third of the population remains below the poverty line and (formal) unemployment is 20%. Infrastructure, education and health are particularly lacking for this level of GDP per capita. 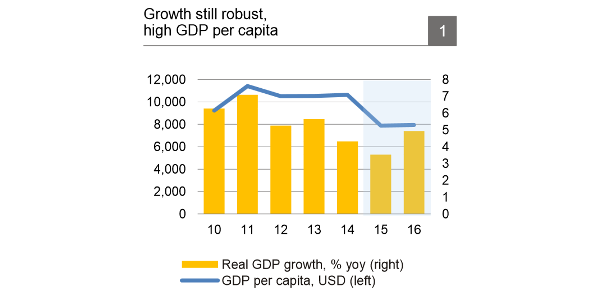 Gabon is a member of the Economic and Monetary Community of Central African States (CEMAC). Its common currency, the CFA Franc, is pegged to the Euro and guaranteed by the French Treasury. This contributes to relative exchange rate stability and low inflation (forecast at 2.5% on average in 2016).

Gabon’s economy heavily relies on oil (it accounted for around 50% of government revenue and 35% of GDP in 2014) and has been hit by low oil prices as well as declining oil production. The current account swung to a large deficit of around 7% of GDP in 2015, following a sharp decline in oil exports (oil accounts for 80% of total exports), and will remain in deficit in 2016. A part of its external financing plan, the government issued a new $500m Eurobond in June. FX reserves fell significantly in 2015 but remain adequate at around 4 months of import cover. 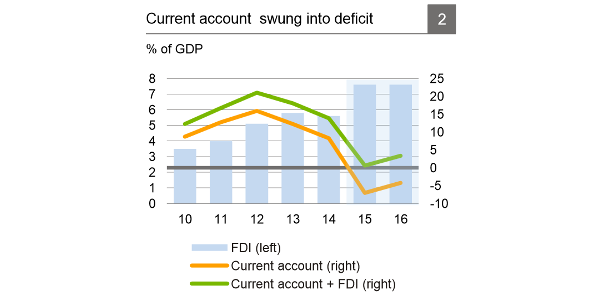 The fiscal balance turned into a deficit of close to 4% of GDP in 2015, although it is likely to decline to 2.5% of GDP in 2016 on the back of conservative budgeting and spending cuts. Likewise, public debt increased sharply (to 40% of GDP in 2015 from 30% the previous year) and will remain high in 2016. Arrears to private and bilateral creditors have accumulated but the government has taken measures to clear them and improve debt management. 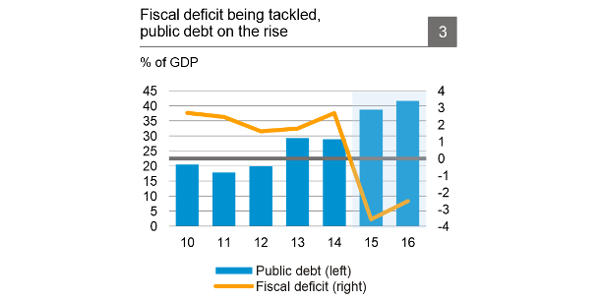 Governance indicators are weak according to the World Bank and Gabon ranks 162 out of 189 for ease of doing business. The government expects the new mining code to help increase transparency and draw investment to the sector.

President Ali Bongo Ondimba continues to assert his authority over the Gabonese Democratic Party. Ahead of the 2016 elections, the opposition has become stronger but remains divided. Mild popular unrest is frequent, related to frustration with living standards.