Sub-Saharan Africa’s manufacturing sector is notoriously underdeveloped. Although the continent has an abundance of natural resources, most of these are exported in their raw form for further processing abroad. 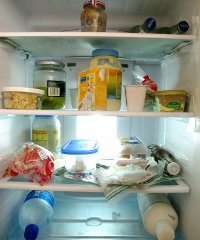 During a recent editorial trip to Tanzania, I took a look at the origin of the products inside the fridge of an average expat household living in Dar es Salaam, to see what I could learn about the country’s food processing industry. Common logic goes that the more imported products, the weaker the local industry.

Contents of the fridge with the origin of each product:

From the 22 products in the fridge, only four (18%) were produced in Tanzania. However, when products from Tanzania’s neighbour Kenya are included, the figure goes up to seven (32%).

There are certainly some of these goods that can, and should be, manufactured in Tanzania. With abundant agricultural land, Tanzania should surely not import products such as fruit juice, yogurt, cheese and pickled sweet cucumbers.

I do realise that just because this specific household had an imported product in their fridge, doesn’t necessarily mean that it is not made in Tanzania at all. For example, on my flight back to South Africa, the airline gave us Made in Tanzania yogurt for breakfast. While my fridge study is far from reliable research, it does provide some interesting food for thought.

Jaco Maritz is editor-in-chief of How we made it in Africa.