In line with the prevailing commodities boom, we foresee a similar trend on sources of power such as coal and uranium. Indeed, the Asian economic boom has created strong demand for fossil fuels. However, the critical shortage of power has also had a negative impact on economies. 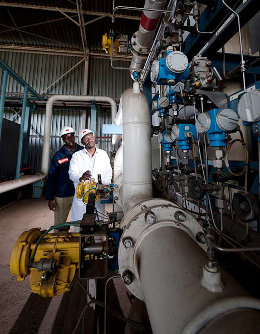 According to the Millennium Challenge Corp,. a US government agency, power outages cost Malawi about MWK36bn (USD238m) annually, an equivalent of 4.4% of total national income based on the country’s USD4.9bn economy.

Indeed, erratic electricity supply appears to be one of the main obstacles to doing business in most African countries. In Zimbabwe, for example, companies such as Sable Chemicals (51% owned by listed TA Holdings), depend heavily on electricity supply for electrolysis and viability is largely a function of the tariff set by electricity utilities.

In the same vein, Mwana Africa’s Bindura Nickel Corporation’s mines remain under care and maintenance not only because of the lack of capital but also as a result of the cash costs that are hinged on the cost of power.

Even with the advent of dollarisation in Zimbabwe, capacity utilisation levels have not breached the 50% mark for most companies, largely as a result of structural constraints that include power shortages.

In a trend that seems to be gaining traction, MTN, a mobile telecommunications group in South Africa, unveiled its 2MW tri-generation plant in a move intended to ease its dependence on Eskom electricity. The group announced that the ZAR22m (USD3m) methane-driven plant would ensure continued security of supply and support its growth plans.

According to Karel Pienaar, the managing director of MTN SA, the plant would ensure that the company’s expansion and growth plans would not be hampered by energy shortages or a lack of power supply. MTN joined other big South African companies such as petrochemicals group, Sasol, that are taking steps to generate their own power.

In the same light, Zambia‘s Copperbelt Energy Corporation (CEC) is stepping up efforts on preparatory works for the development of Kabompo Gorge hydro power station in North-Western Province. The company plans to construct the 33MW power station at an estimated cost of USD120m.

In Zimbabwe, Rio Zim’s Sengwa Colliery Power Project, in which it has a 50% stake, and is estimated to cost USD3bn, has the potential to generate 2,400MW by 2014.

However, global environmental concerns have necessitated a shift towards green forms of energy such as wind and solar. A classical case it the probe relating to the USD3.75bn World Bank loan to Eskom that is earmarked at financing a coal-fired power station. Communities in South Africa’s Limpopo Province are concerned about the potential health impacts from the expected emissions from the Medupi power plant. There are also concerns that pollution would negatively affect agriculture, livestock rearing, and eco-tourism.

Nonetheless, we believe coal and other energy related equities will continue to be propelled by the strong global demand for power. We advise investors to watch counters such as Hwange Colliery (ZSE), RioZim (ZSE), Forsys Metals Corp (DEvX, NSX) and CEC (LuSE), which provide exposure to the sector’s potential.