It is an audacious US$4.8bn project undertaken by one of the world’s poorest countries. At the construction site in the Benishangul region of Ethiopia near the Sudanese border, some 8,500 workers are labouring tirelessly every day to build the gigantic Grand Ethiopian Renaissance Dam. When completed in 2017, the dam will generate 6,000 megawatts of electricity for domestic consumption and export. 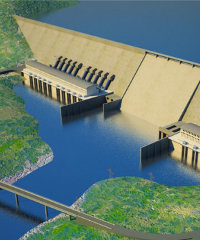 An artist’s impression of the Grand Ethiopian Renaissance Dam.

On the surface, the 558 ft tall dam – Africa’s biggest hydropower project – belies Ethiopia’s financial muscle. The GDP per capita in Ethiopia is only $475. The late Prime Minister Meles Zenawi, who laid the foundation stone in 2011, said the dam would be built without begging for money from donors. Since then, construction has progressed steadily using money from local taxes, donations and government bonds. Ethiopians abroad and at home contributed the first $350m, with government workers contributing amounts equivalent to a month of their salaries.

Semegnew Bekele, an Ethiopian construction engineer working on the dam, told The Guardian, a British newspaper: “Ordinary people are building an extraordinary project.” Development experts now showcase the dam as proof of an innovative approach to project financing. “Approximately $450m has been raised from Ethiopians to help build the dam and I think the target is probably a billion dollars,” says Zemedeneh Negatu, managing partner at Ernst & Young Ethiopia, a financial consulting firm.

Ethiopians, private companies and even other countries such as Djibouti are buying bonds. In addition, the Ethiopian Electric Power Corporation, a state-owned utility, is investing its own revenue and the money it is borrowing from state-owned banks. Economists warn that using private sector finance to pay for the dam could slow Ethiopia’s economic growth in the future. But the government counters that this will be offset by selling electricity to countries in East Africa, a region with improving economic growth.

Ethiopia’s recipe for financing the dam from bonds and taxes is being touted as a model for other African countries. This East African country uses a computerised system to track and collect taxes, making evasion difficult. The government regularly carries out awareness campaigns to explain taxation and publicise what collected taxes are funding such as the dam.

Ethiopia’s financing approach, including taxes, is just one of the emerging ways of funding projects in Africa. Other countries on the continent are working towards similar initiatives. Africa currently collects about 27% of its GDP in taxes, which is insufficient to fund infrastructure such as roads, bridges, schools and hospitals.

At the Ninth African Development Forum in Marrakesh, Morocco, last October, Prime Minister José Maria Pereira Neve of Cape Verde explained that Africa could receive more tax revenues with “good governance and transparency in the management of public finances”. Many of the 700 delegates at the conference, which was organised by the UN Economic Commission for Africa (ECA), including some African heads of state, private sector and civil society representatives, discussed innovative ways of financing Africa’s projects. They urged African governments to laser-focus on tax havens where some multinational companies keep their money.

Tax havens, which are places where taxes are markedly low, are a part of the broader problem of illicit financial flows (IFFs) from Africa, an issue that has lately drawn scrutiny. In 2013, for instance, ActionAid, an international non-government organisation focusing on poverty, launched a global campaign to stop Barclays, a British bank, from promoting tax havens in Africa. By “helping your clients set up operations in tax havens like Mauritius, you are part of a system that is draining vital public funds out of the continent each year,” ActionAid warned the bank. Barclays denied it encourages business set-ups in tax havens.

Africa loses between $50bn and $148bn annually to IFFs, according to a 2013 ECA report titled: The State of Governance in Africa: The Dimension of Illicit Financial Flows as a Governance Challenge. Tracking and stopping “illicit financial flows is not just a moral imperative, it is a good input for transformative policies,” said Carlos Lopes, ECA’s executive secretary, in an interview with Africa Renewal held at the conference. IFFs include under-invoicing, over-pricing, double duties, disguised profits and the use of tax havens.

In tones that were at times urgent and angry, some speakers at the Marrakesh conference maintained that while Africa could still accept aid and encourage foreign direct investments, these should not be the main sources of finance. Africa’s vast natural resources such as gold, platinum, diamonds, chromite, copper, coal, cobalt, iron ore and uranium – 12% of the world’s oil reserves and arable land and forests – will continue to be magnets for investors. The rate of return on investment in Africa today, even adjusting for real and perceived risks, is higher than in any other developing region, according to an ECA report.

Lopes is optimistic about Africa’s private sector investment prospects. “Africa might have finally found a way to whet the appetite of private equity investors,” he says, adding: “The reality is that Africa cannot rely on development aid for its transformation agenda, so its appetite is moving towards private investment and domestic resource mobilisation.” The message sounds good except that, again, tax loopholes are spanners in the works. In response, Lopes is arguing for an African common market to harmonise disparate regulatory systems and discourage companies from exploiting both the loopholes and the tax havens.

Private equity funding, which is when rich individuals or institutions inject capital into a company and acquire equity ownership, can be lifelines for companies gasping for cash. Yet, ten years ago, it wasn’t even well known in Africa, according to the ECA. But in the second quarter of 2013 alone, 164 firms secured $124bn private equity capital, according to Preqin, a firm that tracks private equity trends.

The African Development Bank (AfDB) states that between 2010 and 2011, investment deals in Africa increased from $890m to $3bn. In 2012, institutional investors injected $1.14bn in Africa-focused private equity funds, according to African Private Equity and Venture Capital Association, an organisation that promotes private investments in Africa. For example, Ethos Private Equity, a South African firm, alone received $900m from equity funds.

The AfDB has also jumped on the private equity bandwagon, launching a pan-African facility to support the development of women fund managers. Geraldine Fraser-Moleketi, the bank’s special envoy on gender, told Africa Renewal that the idea is about looking at “innovative policies because current models are not inclusive.” Africa’s approximately one billion population and a combined consumer spending power that will rise to over $1.3tr by 2020, according to McKinsey, a global management consulting firm, makes the continent a tantalising prospect for private equity funders.

Pension funds pool money from workers to be paid upon retirement and are particularly useful for long-term investments. During tough financial times, pension funds can be handy to augment infrastructure expenditure, financial experts believe. David Ashiagbor, a consultant with the AfDB’s “Making Finance Work for Africa” project, says Africa’s pension funds currently hold $380bn in assets, thanks to a decade of economic growth. Even then, only very few countries, including South Africa, have pension systems that are broad-based, relatively transparent and protect beneficiary rights. Another problem is that many pension funds lack credibility due to poor services to beneficiaries and mismanagement of funds, according to 27four, a South African firm that consults on managing retirement funds. Consequently, not every African country can rely on pension funds for projects.

Despite Africa’s socioeconomic challenges, Lopes remains optimistic. “I am also a realist,” he says, identifying three megatrends in Africa’s favour. “The first is the demographic one. It is true the rest of the world is aging and Africa is getting younger. The second is the hard commodities in Africa once you take out oil and gas. The third is Africa’s reservoir of productivity through unused arable land.”

Cristina Duarte, Cape Verde’s finance and planning minister, who has announced her candidacy for the AfDB’s presidency, says Africa must keep trying to grow investment at home, adding: “How can we convince others to invest in our continent and in our development if we are not doing the same to the full extent of our ability?” Still, the current project financing picture in Africa is mixed: Ethiopia’s fast-moving dam construction is a success story compared with a trans-West African highway that is yet to be completed 40 years after it was conceived. At the Marrakesh Development Forum, however, the palpable feeling was that Africa is entering a new dawn of innovative financing.