In 2010/2011, Côte d’Ivoire experienced significant unrest in post-election violence between the supporters of current president Alassane Ouattara and those loyal to the previous incumbent Laurent Gbagbo. 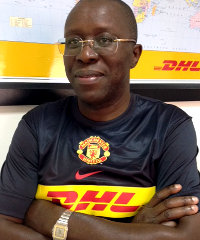 However, these days the political situation is stable, says Patrick Assi, country manager for logistics company DHL in Côte d’Ivoire.

“There was a serious political crisis in Côte d’Ivoire, which ended up in a civil war. It received a lot of publicity, and it was preceded by 10 years of political turmoil. However, the political outlook is currently stable, at least for the short term. It has been about a year without any serious trouble,” Assi told How we made it in Africa.

The African Development Bank (AfDB) has announced that it is in the process of relocating its headquarters from Tunis back to Côte d’Ivoire’s commercial capital Abidjan. The AfDB currently runs its operations from its temporary location in the Tunisian capital since relocating there from its Abidjan headquarters in 2003 due to the Ivorian crisis.

According to Assi, foreign investors are also showing interest in the country, although many are “tip-toeing until they can be sure of long term stability”. Local business people, who often have a better understanding of the risks, are also investing in new projects.

The agricultural sector is responsible for most of DHL’s business in Côte d’Ivoire. The country is the world’s biggest producer of cocoa, much of which is exported from the port city of San-Pédro. Coffee and rubber are also important exports.

A number of French brands have a presence in Côte d’Ivoire. French supermarket chain Casino operates in the country, while its competitor Carrefour, the second largest retailer in the world, has also indicated its intention to set up shop.

Barely a month after the end of fighting, popular French grill restaurant chain Hippopotamus also opened an outlet in Abidjan. At the time the local franchise holder told How we made it in Africa he is not basing the business on a European or Lebanese clientele, but on Ivorians.

Foreign investors need to do their homework

Assi notes that foreign business people need to ensure they have a proper understanding of the market before making an investment. He advises companies to appoint Ivorians, who have a good grasp of the local market, in management positions. “You can’t just come with a bunch of expats and say, ‘we are going to set up and succeed’, because you will make a lot of mistakes in the beginning.”

He says it is relatively easy to find good human resources in Côte d’Ivoire. The labour force is further complemented by a steady number of internationally educated Ivorians returning home from Europe and the US.

According to Assi, the biggest challenges to doing business in Côte d’Ivoire are corruption and insecurity. “The security situation is improving, but there are certain places in Abidjan where I would not advise you to go in the middle of the night.”

Despite this, he says the quality of life in Abidjan is good. “Abidjan is quite a modern city. The cost of living is reasonable. The roads are not bad with a few highways going in and out. You also have some nice beaches to relax over the weekends.”

Stories about Africa’s astonishing economic growth and rapidly advancing middle class have been told at conferences and in the media over the past years. Assi says he is confident conditions on the continent will continue to improve. “Look at a country like Nigeria. They are experiencing massive economic growth after years of so much negativity about Nigeria. Today, Ghana is setting an example for the rest of the continent, although just a few decades ago the country was in a mess. As soon as you have democracy and political stability, then this continent will improve.”