Besides dressing some of the world’s most well-known celebrities, UK-based fashion designer Ozwald Boateng is now also focusing on developing power plants and railway lines in Africa. 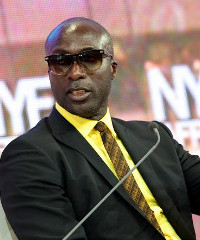 Speaking at the recent New York Forum Africa in Gabon, Boateng said that being in fashion has given him an “instinct for timing” and that he believes Africa’s time has come.

“I could be very happy in London, designing my clothes and opening my shops around the world, but as a designer one of the things we learn is to understand the timing of things, because we don’t actually live in the present as designers, we design collections for the future… And I genuinely believe it is the time for Africa right now,” he said.

Boateng, whose parents were born in Ghana, is the youngest and first black tailor to open a shop on Savile Row, a famous London street known for its traditional bespoke tailoring. He is well-known for giving the British art of tailoring his own modern twist.

Boateng is one of the co-founders of the Made In Africa Foundation (no relation to this publication), which aims to support and fund master plans and feasibility studies for large-scale infrastructure projects on the continent. Nigerian oil and gas magnate, Kola Aluko, is also involved in the foundation.

According to Boateng, Made In Africa is currently focused on raising US$400 million for its initiatives.

In a film made by Boateng, which was shown to delegates at the event in Gabon, the designer highlighted the immense potential of the Inga dam hydropower project. The site for the proposed dam, which could be much bigger than China’s Three Gorges dam, is at the Inga Falls on the River Congo.

The designer said that Africans in the diaspora are getting increasingly involved with the continent. “There is this need to be here now. If you are from the diaspora, you are feeling that there is something happening in Africa, and you want to be involved in it…”

Boateng noted that Africa needs to market itself better, and called for each African country to contribute to an advertising campaign focused on promoting the continent.