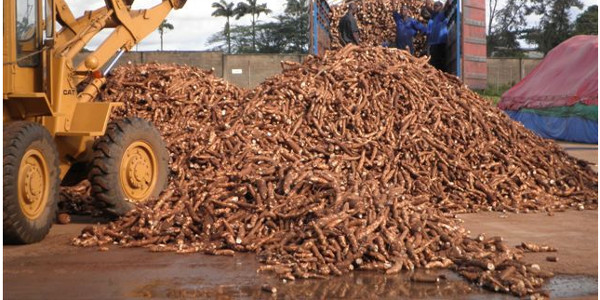 Cassava tubers being processed by Thai Farm International in Nigeria

Cassava is a starchy tuber produced mainly in the tropical and subtropical regions of the world, both north and south of the equator. The root was introduced to Africa between the 16th and 17th centuries by the Portuguese, who brought the stems from Brazil. From the delta of the Congo River (where it was initially planted in Africa), cassava spread throughout the continent and, today, the tuber is cultivated in more than 35 countries.

In many of those countries it has become the main source of carbohydrates and has replaced some traditional staples such as millet and yam. Cassava has been successfully incorporated into many farming systems across the continent.

Countries where cassava is cultivated

Nigeria is the world’s largest producer of cassava. Decades ago, the country was a net exporter of agricultural products. However, with the growing revenue from oil exploration, the country stopped developing its agricultural sector and now spends US$11bn annually on food imports. The drop in the oil price created a gap in revenues that makes such a level of food imports unsustainable. With its adaptability to a dry climate, high levels of carbohydrate and variety of sub-products, cassava shows strong potential in helping Nigeria to become less dependent on food imports in the near future.

The worldwide output of cassava grew from 176m tonnes in 2000 to 274m tonnes in 2014. Africa was responsible for 54.3% of the global production in that year and Nigeria alone counted for 20.2% of the global cassava output, making it the world’s largest producer of the tuber. Thailand and Indonesia rank as the second and third greatest producers, with 30m and 23m tonnes of cassava production, respectively, in 2014 (see graph below).

Cassava production depends on a supply of quality stem cuttings. The multiplication rate of planting materials is very low compared to grain crops, which are propagated by seeds. In addition, cassava stem cuttings are bulky and highly perishable, drying up within a few days if not cared for.

Despite Nigeria being the largest producer of cassava, most of it comes from smallholder farmers with between one and five hectares of land, who employ simple techniques of plantation with limited use of fertilisers and pesticides. Cassava is produced predominantly by inter-cropping: planting it alongside yams, maize, or legumes, and typically its production is used for subsistence or sold in local markets.

Low productivity is the result of poor farming tools, the near absence of mechanisation and limited market opportunities. It takes an average of eight to 10 days for an African farmer to harvest a single hectare of cassava, compared to an Asian farmer who harvests the same area within six hours.

Cassava has enormous potential as a food security crop and also as a major contributor to improving the livelihood of rural, poor farmers within the continent. To reach this potential, crop yields will have to be improved. The use of better-quality stems, fertilisers, mechanisation, frequent weeding and the right planting and harvesting times are some ways cassava crops can be enhanced.

Apart from food, cassava is very versatile and its derivatives and starch are applicable in many types of products, including foods, confectionery, sweeteners, glues, plywood, textiles, paper, biodegradable products, monosodium glutamate, and medicines. Cassava chips and pellets are used in animal feed and alcohol production.

Although Nigeria is the biggest cassava-producing country in the world, both import and export flows are negligible. The government tried to change this in July 2002 by issuing a ‘Presidential Decree’ establishing that bread flour should contain 90% wheat flour and 10% cassava flour. That initiative aimed to increase the demand for cassava, develop an internal market and grow cassava production to the point of turning Nigeria into a net exporter of cassava flour.

In theory, the increased demand for the product would also incentivise farmers to yield more and better cassava crops. The Nigerian government targeted reaching $5bn in revenue from cassava exports by 2007 and aimed to increase production to 150m tonnes by the end of 2006.

Unfortunately, the plan fell far behind its goal. Although Nigeria certainly increased its cassava production between 2002 and 2014 – it grew from 34 to 54 million tonnes in this period – this was still only a third of the government’s target.

The policy failed partly because wheat-flour millers could not find sufficient industry-grade cassava flour within the country – the result of limited processing capacity – and partly because cassava flour (which contains no gluten) caused problems when it came to getting bread to rise. In addition, the flour made of cassava was more expensive than the pure wheat flour, giving no incentives for buyers to use the local product. A plan is only good if it covers all aspects of its implementation.

In 2002, Nigeria was producing an average of 10 tonnes of cassava per hectare and this figure increased to 12 tonnes per hectare by 2010. However, heavy rains and floods in 2012 (and, to a lesser degree, in the following years), caused the productivity of the crops to sharply decrease – to less than 8 tonnes per hectare from 2012 onwards (see graph below).

The Nigerian government certainly has a lot of work to do if it plans to stimulate cassava production in the country. However, the receptive environment for investment in cassava enterprises created during the earlier years after the creation of the policy brought some new entrepreneurs to the country.

One example is South African Louw Burger, who has  started a cassava refining business in Nigeria, called Thai Farm International (TFI). He brought with him the Thai technique of transforming cassava into starch. Thailand is the largest exporter of cassava starch in the world. The company has its own cassava production, but it also buys the output from small local farmers. Currently the business processes 60,000 tonnes of roots per year, which are refined into 18,000 tonnes of flour. The company is aiming to increase the input of tubers to 96,000 tonnes in the next three years. This would generate 30,000 tonnes of cassava flour annually.

Currently TFI buys 90% of its required cassava root inputs from local farmers, while 10% is produced by self-owned farms. The target for own root production is 50%. The reliance on buying the production from local farmers could be retained in a more mature market, but all the processors are moving into own farming, which does not bode well for small farmers once the current food crisis is over.

At this point, local producers pay little heed to contracts and most of the time sell their produce to the highest bidder – usually local market buyers who use cassava to produce garri, a granular food product produced by grating cassava roots into a mash, fermenting and de-watering the mash into a wet cake, and roasting the wet material into gelatinised particles. It has a slightly sour taste and can be white or cream, depending on the variety of cassava used and processing method adopted. Nearly 75% of cassava produced in Nigeria is processed into garri – in itself not a bad thing, because without garri, the nation would be in serious trouble from a food point of view.

The recent surge in garri demand is a result of the current ban of rice imports. TFI’s Burger says, “Whenever there is a shortage of food and the demand for garri goes up, we find the deliveries from our small farmers drop and our production suffers”.

This lack of contractual commitment also diminishes the incentives larger buyers like TFI have for investing in the development of smallholders – for example providing better cassava stems, fertilisers and training.

Cassava in Nigeria is mainly consumed as a food staple. “Very little is processed into the many and varied uses you see in Thailand, Indonesia and Brazil, for example,” says Burger. However, there is a potential market for alcohol made using the product.

Burger explains, “There is a huge market for potable alcohol in Nigeria. We already have one potable ethanol company in operation, with a capacity of 500,000 litres per day, while two more plants stand to be commissioned in the coming year”.

In addition to this, there are companies planning to produce maltose and glucose syrup directly from cassava flour instead of using starch. This method could generate cost savings of up to $100 per tonne.

Some sub-products of cassava are used as animal feedstock. “Siftings” is one such by-product of cassava flour – with as much as 40% starch – and is used as source of carbohydrates for chicken and fish farming. TFI is engaged in this market, but the company’s cash cow is the snack business.

“We have found a massive demand for cassava flour in the biscuit sector and in the starch-replacement market. Our flour is 80% starch while pure starch actually only contains 85% of the product. So, both are quite similar, but our flour costs are about 35% less than starch. Many starch users in the food sector find that our flour works as well as starch, but costs a lot less. They are lining up to buy all we can produce,” says Burger.

Cassava could become the raw material base for an array of processed products that would increase demand for the tuber and contribute to agricultural transformation and economic growth in many sub-Saharan countries. The market for cassava in Nigeria is enormous and could still be explored further.

While the government plan to unlock this potential was based on the best intentions, the lack of a more in-depth study on the market dynamics and diminishing political will put a halt to what could turn Nigeria into a net exporter of cassava and make the tuber a source of foreign exchange.

With billions of dollars spent on food imports annually – and this figure growing steadily from an already unsustainable rate – the government has to create and enforce policies that foster agricultural development. Cassava, with its adaptability to drought, high caloric content and variety of sub-products, could become the centrepiece of a much needed agricultural revolution in Nigeria.

The author, Otavio Veras, is a research associate of the NTU-SBF Centre for African Studies, a trilateral platform for government, business and academia to promote knowledge and expertise on Africa, established by Nanyang Technological University and the Singapore Business Federation.