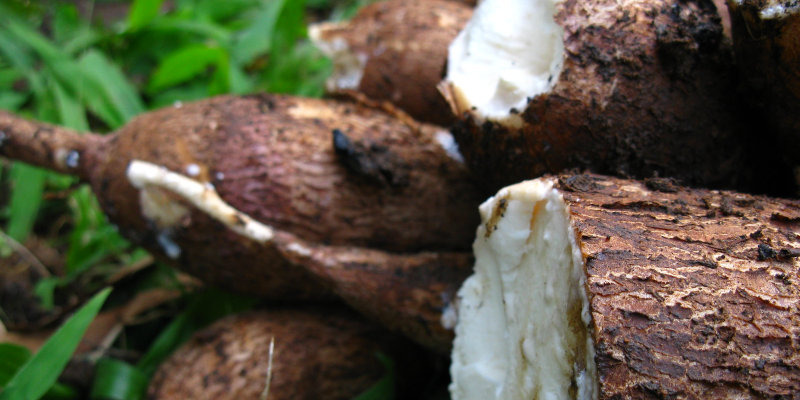 Cassava, a root crop which looks like a large sweet potato, is one of the most widely grown crops in Africa. Photo by Ikhlasul Amal

As the coronavirus spreads in Africa, farmers growing drought-hardy cassava are reaping a windfall as it is turned into sanitiser.

To deal with drier conditions brought by a shifting climate, farmer Pamela Nyirenda last year shifted to growing drought-hardy cassava, among other new water-sipping crops such as groundnuts and cowpea. But this year her cassava field has brought not just a secure harvest but also a financial windfall, as buyers snap up the tubers to produce ethanol for alcohol-based hand sanitiser.

As the coronavirus pandemic hits Africa, cassava flour in Zambia is this year selling for up to 5,000 kwacha ($270) a tonne, a steep rise from less than 2,000 kwacha last year at this time, according to the Zambia National Farmers Union.

Small-scale farmers like Nyirenda, 39, who has a two-hectare family farm near the border with the Democratic Republic of Congo, say they’re fast reaping the benefits of switching to hardier crops, both in terms of better food security in a time of uncertainty and more income.

“This is my second year cultivating [it] and I have managed 10 tonnes of cassava tubers,” she told the Thomson Reuters Foundation in a telephone interview. She said she expects to earn nearly twice as much from her cassava this year as last.

As they struggle with longer and more frequent droughts linked to climate change, a growing number of farmers in Zambia – and across sub-Saharan Africa – are switching to water-saving crops more likely to ensure a harvest, even in poor conditions. Now that switch away from staples such as maize and rice to millet, cassava, sorghum and other crops is having multiple payoffs, particularly for farmers who depend solely on rain-fed fields for a harvest, agricultural experts say.

Musika, a Zambian agricultural non-profit, noted than over 25,000 farmers in Zambia – many of them women – are now growing particularly drought-tolerant varieties of cassava, up from 5,000 five years ago. Pamela Hamasaka, head of corporate affairs for Musika, said demand for cassava ethanol has surged in Zambia as companies rush to churn out more hand sanitiser to control the spread of the deadly coronavirus pandemic.

Zambia has so far recorded close to 100 confirmed cases of the novel coronavirus, with three deaths. Public gatherings and non-essential travel have been halted, and in April the president declared use of face masks mandatory in public.

Currently, 250 tonnes of cassava flour a day are being turned into ethanol for hand sanitiser and other products sold locally or exported to neighbouring countries in the region, Hamasaka said. “The advent of Covid-19… has pushed the demand for bi-products of ethanol high,” she said.

But some experts fear turning food crops like cassava into ethanol could hit the region’s food security as a Covid-19 global economic slowdown leads to more export bans.

Zambia’s ministry of agriculture projects the country will produce just over a million tonnes of cassava flour this year. The country has seen an average 6% rise in production annually over the last five years, according to ministry figures.

Cassava is now grown by about a half million small-scale farmers in Zambia, as part of a push to diversify agriculture beyond maize, the country’s drought-vulnerable staple, ministry officials said.