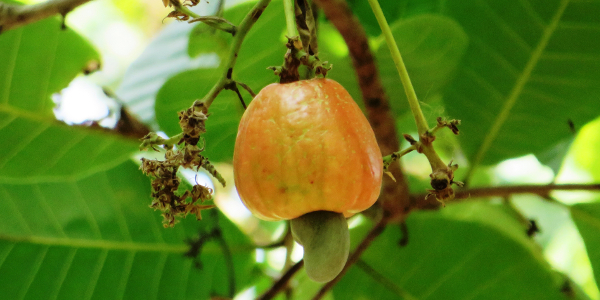 The annual “money-harvesting” season is in full swing in Côte d’Ivoire. For the fortunate cashew nut farmers in the central and northern parts of the country, February through June is harvest time.

Here cashew nut growing has improved the lives of these small-scale farmers significantly. They get more money from it than they would make from growing food crops or cotton. The impact has transformed their lives and they now refer to their orchards as places where “money grows on trees.”

“These farmers don’t grow cocoa like elsewhere in the country. Cashew nut is the only cash crop they can rely on all-year-round,” says Ga Kone of the Conseil du Coton et de l’Anacarde (CCA) or the Council of Cotton and Cashew. “So, it is understandable that they would refer to their orchards in this way,” Kone told Africa Renewal.

Côte d’Ivoire produced 550,000 tonnes of raw cashew nuts in 2014 – about 22% of the global production. The figure is expected to hit a record 600,000 tonnes at the end of the 2015 harvesting season, placing the country as one of the world’s top producers. The West African nation’s annual production has been steadily growing at an average rate of 11%, according to CCA, the sector’s marketing board made up of representatives from the government, farmers and banking associations.

CCA is also responsible for making sure farmers are paid decent prices for their crops. For example, for every $10 of raw cashew nuts Côte d’Ivoire exports, $6 is expected to be paid back to the farmers.

To the Ivoirian economy, the cashew boom presents an unexpected but welcome opportunity to diversify agricultural exports beyond cocoa beans and rubber. It will also help develop the country’s agro-industry. However, to realise its full potential, Côte d’Ivoire has to process and add value to its raw cashews. While the country has the capacity to process 65,000 tonnes of raw nut annually, it currently processes 40,000 tonnes, according to CCA. Even then, the processing is usually limited at separating broken nuts from whole nuts and packaging them in sacks for exports. Broken nuts receive lower prices.

Cashew trees were first introduced in West Africa from India in the early 1960s to fight desertification and soil erosion through agroforestry and to establish protected forest areas. The evergreen tropical tree can survive in difficult conditions, including sandy soil, and can grow up to 12 metres high and is highly recommended by environmentalists for reforestation programmes.

For the decade ending in 1970, Côte d’Ivoire produced a total of about 300 tonnes of cashew nuts. Its commercial production remained modest for the next 30 years. A milestone was reached in 2002 when production topped 100,000 tonnes. Except for a small dip in 2003, commercial production has been growing steadily since then.

Côte d’Ivoire’s cashew nut boom is remarkable. “The growth is more than impressive. It’s astounding,” Jim Fitzpatrick, a cashew expert told Reuters late last year. “We’ve never seen a country grow its production in the way Côte d’Ivoire has over the past decade.”

The ease with which the trees grow, the reduction in cotton farming – the traditional cash crop of the region – and the growing global demand for processed cashew nuts are some of the reasons behind the country’s impressive performance. India and Vietnam’s rising needs for raw cashew nuts have also fuelled the growth of cashew farming in Côte d’Ivoire. As the top world exporter of processed cashew, India imports 50% to 60% of raw cashew for processing from Africa and Asia.

African countries produce about 45% or 1.2m tonnes of global cashew nuts annually. However, only 10% of this is processed locally, according to the African Cashew Initiative, a project backed by the German government, private companies, and the Bill & Melinda Gates Foundation. Members of the initiative include five African producers: Benin, Burkina Faso, Côte d’Ivoire, Ghana and Mozambique.

For all the remarkable cashew nut growth, however, the overall benefits to the cashew growing areas are limited. Only a small number of small-scale farmers are reaping the benefits. In 2014, for example, the Ivorian cashew production relied on 250,000 farmers while its revenues were shared by an estimated 1.5m. In the Zanzan District in north-eastern Côte d’Ivoire, one of the country’s cashew-growing regions, poverty levels remain among the highest nationwide. Six out of every 10 people live below the poverty line – meaning they cannot afford a daily supply of one kilogramme of rice, the local staple food – and three-quarters of the population have no access to clean water.

Côte d’Ivoire stands to gain up to $127m in export revenue if it moves from exporting raw cashews, about 500,000 tons currently, to boosting its annual processing capacity to 100,000 tons of cashews by 2020, a study commissioned by the government shows. The windfall could even be greater and spur a real cashew industry capable of competing with India and other cashew nut producers such as Vietnam on international markets.

As the cashew sector comes of age, the timing could not have been better for Côte d’Ivoire. Investors reportedly worried by Indian and Vietnamese market dominance might choose to diversify supply and start investing in African cashew production.

If successful, Côte d’Ivoire could be a good example of how locally-generated added value can generate extra government revenue while also creating jobs. According to a study carried out by the CCA, every 100,000 tonnes of processing capacity Cote d’Ivoire develops will create 12,300 factory jobs and another 10,000 elsewhere in the sector.

The global cashew market was valued at up to $7.8bn last year and is projected to grow by 15% this year. Growing demand from China is expected to sustain the vitality of the market. Then money could just continue to “grow on trees” benefiting more Ivoirians.