During the days of large sailing vessels, the remote South Atlantic island of St Helena used to be an important port of call for ships sailing from Europe to the East. However, with the decline of sailing vessels and the opening of the Suez Canal, the island’s economy took a big knock. 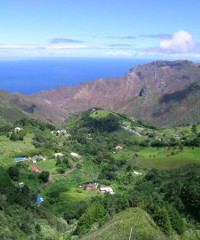 The development of an airport on St Helena will open the island to more visitors and business opportunities.

St Helena is a British Overseas Territory and it has a population of only around 4,000.

Those wanting to travel to St Helena need time on their hands. Situated roughly 2,000km west of the southern Angolan coast, the only way to reach the island is by boat. It is a five day journey from Cape Town on the RMS St Helena, one of the last working Royal Mail ships plying the oceans.

However, St Helena’s economy is likely to see a dramatic about-turn. Work has started on a new international airport that is set to open in February 2016.

With the new airport, the island hopes to turn itself into an upmarket tourism destination. Studies show that tourist arrivals could rise to 30,000 per annum within 10 years from the opening of the airport. In 2012, the island attracted just over 2,000 visitors.

A delegation from the island was recently on a road show in Cape Town to highlight investment opportunities that will present themselves because of the airport.

“The purpose of the airport is not just to give St Helena air access. It is to enable the island to develop a modern tourism-based economy,” said Mark Capes, Governor of St Helena, at the event. “St Helena is reconnecting to the world. We want to develop our tourism infrastructure and expand our economy.”

In addition to tourism, St Helena is also hoping the airport will boost other industries, such as commercial fishing and agriculture.

St Helena’s main draw card is its natural beauty. Because of its remoteness, there are plant and animal species that are unique to the island. In addition, the island boasts historical sites such as French military leader Napoleon Bonaparte’s house, where he lived in exile for the six years until his death.

The island also offers opportunities for diving and game fishing. “Even somebody like myself who is completely useless when it comes to fishing has pulled out a 230 pound tuna. The fishing really is quite something,” said Julian Morris, the outgoing head of the Enterprise St Helena development agency.

According to Morris, St Helena’s remoteness and the fact that it is a relatively unknown destination has major appeal for visitors. “St Helena is probably one of the last unexplored, unvisited places on the planet. Everyone has been to Mauritius; everyone has been to the Seychelles. That appeal of going somewhere where people haven’t gone to, and people typically don’t go to, is a very powerful pull.”

It is envisaged that the airport will create business opportunities for new hotels, restaurants and outdoor activities operators, to name a few.

St Helena is looking to develop a “low volume, high value” tourism industry. Morris said that due to St Helena’s small size, however, there is a cap on the number of visitors the island can accommodate.

“We are not chasing 20-30 hotels. We are chasing probably three or four hotels… We have to protect the product, so we can’t over develop,” Morris said.

Most of St Helena’s visitors currently come from South Africa and Europe. The first flights would likely be from Cape Town, with possible additional routes to Johannesburg and Europe.

St Helena has traditionally had strong business links with South Africa, with Cape Town generally considered to be the gateway to the island. “The island’s point of resupply is Cape Town. South African companies are typically the providers of choice for food stuffs, for building supplies [and] for services,” said Morris.

It is still another two years until the opening of the airport and according to Morris, businesspeople who get in early will have a first mover advantage. “There is an opportunity for people to get ahead of the game.”