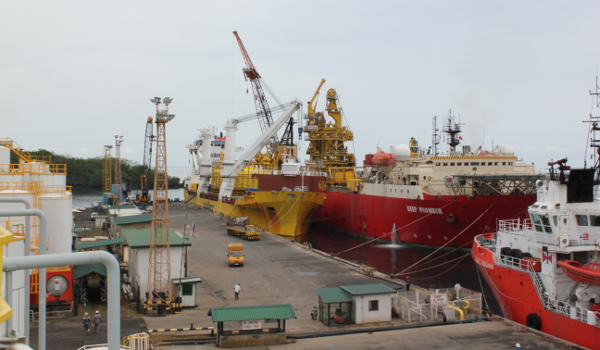 Throughout the world there are numerous examples of how countries – such as Dubai, Singapore and China – have attracted investment and boosted economic development through the establishment of “free zones”, usually ring-fenced areas exempt from national import and export duties.

Taking a leaf from the book of these global success stories, the Central African country of Equatorial Guinea is working to create something similar at the Luba Freeport, situated about 50km from the capital Malabo. The goal is for Luba to be a hub for West and Central Africa’s oil industry, a logistics base from where companies can service their operations across the region.

The man who heads up the project is Scottish-born Howard McDowall. He has a long history in the shipping and logistics industries, and says his first job was loading vessels at a port in Scotland – often toiling in heavy wind, rain and snow conditions. McDowall’s first job in Africa was in 1983 as a shipping manager in Algeria, after which he moved to Gabon where he worked in logistics for the oil industry. In 2000 he was offered a position at Luba Freeport, just as construction on the project commenced.

It currently counts the likes of ExxonMobil, Hess, Noble Energy, Baker Hughes and Schlumberger among its clients.

Goods can enter and exit the port without incurring any duties. For example, an oil services company with operations throughout the Gulf of Guinea can warehouse their chemicals at the port, and export them to specific projects as required, without having to pay duties. Companies are also eligible for a variety of other tax concessions

While the port still has some way to go to resemble a major hub, McDowall points out that when he first arrived “there was nothing here”. Equatorial Guinea only discovered oil in the mid-1990s, prior to which it was one of the world’s poorest countries.

“When I arrived in 2000, it was really the start of the oil industry in Equatorial Guinea. At that time we operated a very small operation for ExxonMobil and Hess, who were the only people drilling. And since then Luba Freeport has expanded into what you see now,” explains McDowall.

The port is part of a broader development, called the Industrial Petroleum City of Luba, that plans to transform the town into a centre for oil and gas activity in Equatorial Guinea.

However, Luba is not the only port project with ambitions to be a one-stop-shop for the region’s hydrocarbons sector – similar initiatives include the Lagos Deep Offshore Logistics Base (Nigeria), the Walvis Bay port in Namibia, and the proposed Saldanha Bay Industrial Development Zone in South Africa.

So what does it take to be a successful hub for the oil industry?

“The geographical location is obviously a big factor,” notes McDowall. “We are sort of in the centre of the Gulf of Guinea.” He reckons Luba can serve the oil industry as far north as Côte d’Ivoire, and down to Republic of the Congo.

Water depth at the port is another important aspect. “The main problem experienced in ports, right up and down the west coast of Africa, is draught (the depth of water needed to safely berth a vessel on the quayside). You take Douala (Cameroon’s commercial hub) – large vessels can only get into Douala once a day because of the sandbar – they’ve got to wait for high tide.”

He explains Luba has a natural water depth of 10 metres at the quayside, which can be increased to 20 metres with the extension of the quay.

“The bay itself is an ideal spot for oil rigs and vessels coming in. If you draw a straight line over the mouth of the bay, the water depth is 60 metres. So there are no impediments to coming into the bay, there is no need for navigation.”

“The new super container vessels have got a requirement for 20 metres draught. There are no ports in the region that can accommodate them. So we are in an exceptional position.”