South Africa experienced a material slowdown in growth to 3.2% in the second quarter from 4.6% in the first quarter. Gross domestic product (GDP) excluding agriculture advanced just 2.7%. 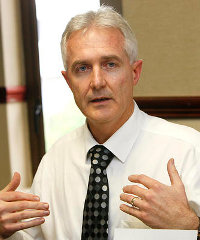 There were, however, some bright spots in the data. Whereas mining and manufacturing GDP inevitably slowed from their stellar growth rates during the first quarter, a recovery in tertiary industries gained further traction. Also, the growth in corporate profits gathered momentum.

Specifically, mining GDP collapsed, reflecting the 24.3% plunge in production in the quarter. Against this, manufacturing GDP fared better than expected considering the marked loss of momentum in production over the three months.

Meanwhile, the annual advance in total worker compensation eased to 8.7% from 9.1% in the first quarter. However, we estimate that real consumption increased by 4% during the second quarter – and this should provide significant support for final household consumption expenditure.

Looking ahead, we expect some acceleration in GDP during the second half of 2010 based on a continued improvement in tertiary industries, which comprise the largest component of GDP by far.

Buoyant terms of trade, a strong currency and disinflation should enable the Reserve Bank to maintain a low interest rate structure for an extended period; underpinning a favourable environment for domestic final demand.

The improved terms of trade is a support for income growth, while disinflation boosts the advance in real income. This is reflected in the robust increase in the GDP deflator juxtaposed against a sharp deceleration in the final household expenditure deflator. The flip side of strong nominal compensation growth is, however, a likely lacklustre employment environment.

Finally, while the Reserve Bank’s leading economic activity indicator has softened materially on margin, its coincident indicator has shifted firmly into expansionary territory. So the recovery continues and, barring unpleasant surprises from abroad, GDP is on track to average close to 3% in 2010 (and about 3.5% in 2011 for now).

Arthur Kamp is an investment economist at Sanlam Investment Management.