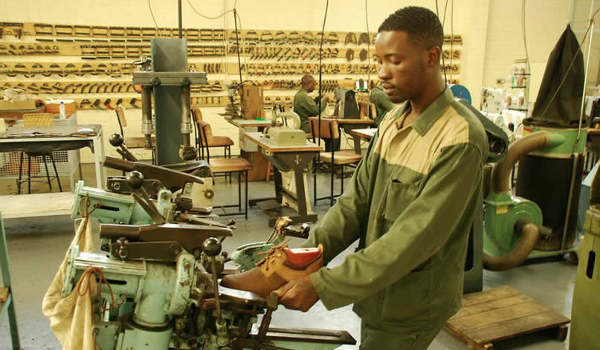 For Zimbabwean businesses the past 10 years have been challenging, to say the least. In 2008 the country experienced one of the worst cases of hyperinflation in world history – with a monthly inflation rate of 3,500,000%, which saw the introduction of the infamous ZW$100 trillion banknote. Since then the country has abandoned its Zimbabwean dollar and adopted a multicurrency system where nine currencies have been authorised as legal tender (although the US dollar is the most widely used).

Today the Zimbabwean economy faces new challenges – namely a shortage of US dollars in the market. The country is over-reliant on imports – mostly paid for in US dollars – in part because many local factories closed down.

One manufacturer and exporter that has managed to survive Zimbabwe’s economic rollercoaster, however, is The Courteney Boot Company, which produces handmade safari and outdoor footwear and accessories from natural gameskin leathers such as hippo, kudu, Cape buffalo, impala, Nile crocodile and ostrich.

The company was founded in 1992 in Bulawayo by husband-and-wife team, John and Gale Rice. John (who died a few years ago) had a lifetime of experience in shoemaking and design, and the duo developed a reputation in the hunting and safari industries by giving top hunters and guides in Zimbabwe and South Africa a free pair of boots.

“John always said that men admire what other men have, whether it’s a knife or a watch or a pair of boots,” recalls Gale.

It wasn’t long before the company began establishing a relationship with retailers in the US and Europe and, within a few years, was asked to supply stock for Westley Richards – a leading gun and rifle manufacturer with strong operations in England and the US. Today the company also stocks other gun and hunting-focused retailers across the world. Its Bulawayo factory employs 15 and has the capacity to produce 30 pairs of boots a day.

Prices vary depending on the type of boot and leather used. But in the US, the company’s Courteney Safari boot can be bought for US$299 in Cape buffalo, $599 in hippo and $999 in Nile crocodile.

Prior to Zimbabwe’s 2008 economic collapse, about half of The Courteney Boot Company’s production was sold locally.

“We had a strong commercial farming sector which hosted a strong hunting community, vibrant tourist industry and varied local economy,” notes Gale. “Every single town had at least one stockist, whether it was a farming co-op, seed company, hardware shop or even the gardening centre.”

But current struggles have stifled domestic opportunities, and Gale says that today 99% of the company’s production leaves the country.

“Our profit margins have also taken a knock because of higher production costs, such as electricity, labour, raw materials – and just the business of doing business in Zimbabwe. There is little consistency in pricing in the country at present.”

Gale says that while they managed to keep operations going during the country’s 2008 crisis, the business was forced to temporarily move manufacturing operations to South Africa as they were unable to get their exports out of Zimbabwe.

“[The products] were backed up at Harare’s airport waiting for a plane, but almost no carriers were flying in at that time. So John and I went to South Africa – to the shoemaking industry, which is centred in Durban and Pinetown – and visited several stitch-down manufacturers to find a temporary home for our production,” she says.

“There were many hurdles, and it was a long commute from Bulawayo, which was very draining. We were profoundly relieved when we could bring everything and everyone back home.”

Zimbabwe has recently banned the imports of some products – including placing heavy import restrictions on goods from South Africa. The country has also limited access to foreign currencies as a result of shortages in the market. But Gale says the company’s focus on export sales has also helped it survive.

“Since we export almost all of our production, the import ban has not affected us. As exporters we are not denied access to our forex earnings.”

The majority of each boot is made from locally obtained game-skin leathers, and the company can still source its packaging material and fabrics in Zimbabwe. However, rubber for the soles, as well as the cements, threads and lacing components, have to be imported from all over the world.

So what does it take to weather challenging business conditions? According to Gale, a willingness to make sacrifices and a long-term view are essential.

“As more and more providers of goods and services close down we’ve had to work harder to achieve any particular result. I’ve had to go back to school to learn many skills that we used to be able to rely on [someone local] to perform,” continues Gale.

“Our factory manager, Helen, knows every single retired engineer with a lathe (a machine for shaping materials) in his garage, and every hole-in-the-wall operation that has the potential to help in some way.”