“People will never stop drinking coffee because they need it, even when in sorrow, as we saw during the last world recession.” 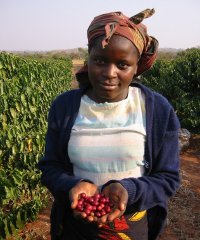 The investment in the Northern Coffee Corporation is expected to lift the morale of Zambia's coffee farmers.

So says Teija Lublinkhof, chairperson of the Zambia Coffee Growers Association. Her confidence in the world’s continued demand for its caffeine fix is, however, not reflective of the fortunes of the Zambian coffee business in recent times.

Zambia’s coffee industry has struggled over the last five years. Output in 2010 fell to 1,250 tonnes from 1,643 tonnes the previous year. This was due to farm closures caused by a lack of affordable long-term finance.

For the season that just ended, exportable production tumbled from a projected figure of 2,200 tonnes of cleans beans to just 736 tonnes.

But better times might be ahead. Earlier this year, the Zambian government invested US$4 million in the Northern Coffee Corporation, formerly known as the Kasama Coffee Company.

At its peak in 2004, the Kasama coffee plantation produced one-third of Zambia’s 6,000 tonnes output that year.

The rebranded company will be managed by an independent team and is expected to employ more than 100 people. Production will commence in 2014.

In an interview with How we made it in Africa’s correspondent in Lusaka, Lublinkhof said that the revival of the plantation would bring hope to the industry. She added that the Northern Coffee Corporation is planning to plant over 500 hectares of coffee, with the first 200 hectares going in by the first half of 2012.

Lublinkhof added that the investment in the Northern Coffee Corporation will boost the morale of Zambian coffee farmers as well as contribute to the economy of the northern region of the country.

“We hope and trust that with government being one of the major stakeholders in the coffee industry in Zambia, we shall have more doors opened for us as we continue to knock, seeking assistance on behalf of the industry,” she noted.

Commenting on the world coffee market, Lublinkhof observed that the past season had been firm with the average price rising to an all time high.

She said indications are that the market would remain firm in 2011/2012 season.

“I would like to encourage [farmers] to continue to be in the coffee business, not only because the market is right just now, but because it is actually good business as long at one does it the right way.”