Consumer-focused companies in Africa typically limit their focus to a handful of national capitals or major cities. This approach is understandable, given that these urban centres are dynamic economic and population hubs. Outside of these first-tier cities, actionable information becomes scarcer – and yet there are significant opportunities, particularly for companies looking to claim first-mover advantage for their specific product or service.

Rural markets should never be overlooked for this reason, but there is another critical opportunity: the fast-growing consumer potential of Africa’s secondary cities. What defines a secondary city varies by study but a good ballpark description is a city with a population that is 10 to 50% of the nation’s biggest city – often falling in the bracket of 500,000 to 3 million inhabitants today – and one which is largely unknown outside of its country’s borders. For example, everyone is familiar with Lagos, but are they aware of Aba, in the southeast of Nigeria? This commercial centre is home to one of Africa’s top 50 concentrations of moneyed consumers, with the disposable income to purchase premium products.

As of 2017, there were 2,400 burgeoning second-tier or intermediate cities worldwide, with nearly two-thirds in Africa and Asia. Why this matters for business is that these urban centres, not their more famous counterparts, are expanding massively in population and economic production, increasingly absorbing the urbanising masses who desire a better quality of life than they could potentially find in their capitals. In fact, worldwide, many second-tier cities are outperforming primary urban hubs in GDP growth, with sociologist Saskia Sassen insisting secondary cities “can be a global platform for companies’ global expansion”.

The big question for businesses is how to tap this potential. Secondary cities have their own problems to overcome, such as infrastructure limitations in the face of rapid growth, but from an onlooker’s perspective the greatest barrier is a lack of market information about them. Fortunately, advances in digital data analysis are helping to overcome this obstacle, producing area-specific, relevant insights that penetrate much deeper than often unreliable commentary on consumer trends found at a national level.

As an example of how this approach works, Fraym set out to identify consumers with the most purchasing power in Kenya – and specifically outside of Nairobi, the obvious centre for consumer activity in the country.

By weaving together satellite imagery with multiple data sources (including surveys, mobile data and remote sensing data), and then applying machine learning algorithms to these layers of information, it was possible to find a significant number of top-tier consumers in Kisumu, Eldoret, Mombasa and Nakuru. Further building on this insight, Eldoret, which is the capital of Uasin Gishu county and one of the largest cities in the country, stands out with a consumer class that is 210 000 strong. 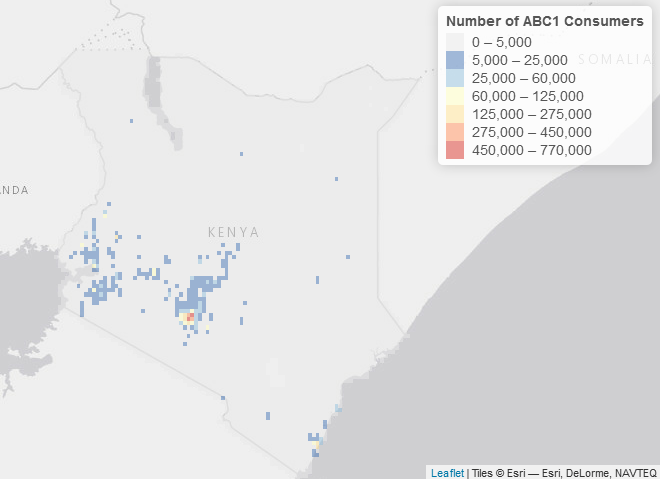 The geospatial core of the analysis means findings can be probed further, zooming in all the way to a neighbourhood level to identify consumer hotspots for an area as small as 1km2. This opens the door to evaluating specific site locations for their proximity to potential customers. Using Fraym’s Kenyan example again, it was possible to assess Eldoret’s Zion Mall as an appealing retail location based on drive times. Our findings? About 180 000 ABC1 consumers reside within a 15-minute drive of the mall, making it a highly desirable location for companies selling higher-end goods to more affluent Kenyans. 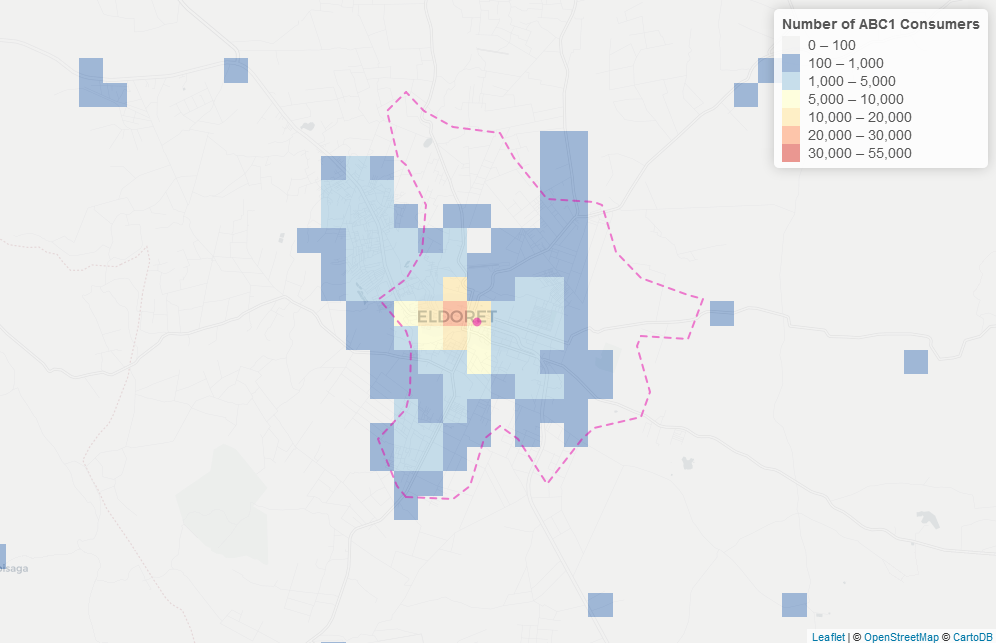 The point is that, even as African markets become ever-more competitive and crowded, with a data-centred expansion strategy it is possible to push into new markets while minimising risk. Companies often focus their attention on national capitals and other dominant cities, leaving promising, unsaturated markets in secondary cities and elsewhere untapped.

Ben Leo is the CEO of Fraym and previous director of Africa Affairs for the White House.