Africa’s emerging consumer class has caught the attention of a number of multinational companies across a variety of consumer facing sectors. The growth in disposable incomes across the continent has led to the expansion of a number of healthcare and beauty companies into various African markets. 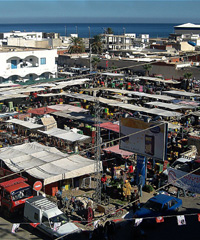 The market of Sayada in Tunisia

This year, East African subsidiary of multinational company L’Oréal announced that it had acquired the healthcare and beauty business of Kenyan firm Interconsumer Products to expand their market presence. In a recent interview with How we made it in Africa, L’Oréal East Africa managing director Patricia Ithau said that Africa is an important market for L’Oréal. The company has been strengthening its presence in Egypt, Nigeria, East Africa, Morocco, Ghana and South Africa in the last four years.

“The potential is huge. I spend time observing how people behave in the washrooms,” said Ithau. “I am fascinated that every single woman, whether an executive or cleaning lady, will come in with a compact and powder their face, line their eyebrows and apply lipstick… Women are increasingly becoming more confident, are loud at home and hold higher offices. I think the next big thing is deodorants. The beauty industry can only progress.”

A recent report by research firm, Euromonitor International, has looked at the top beauty industry trends in North Africa in order to give multinational companies a better understanding of some of the market opportunities and challenges within cosmetics and beauty. To do this, the report assessed four countries in North Africa: Algeria, Egypt, Morocco and Tunisia. Here is a summary of the key findings in these markets.

Following the Jasmine Revolution at the beginning of 2011 – the start of the Arab Spring where President Ben Ali was overthrown – many laws concerning foreign investment were changed, and the purchasing power of Tunisians “improved greatly”, according to Euromonitor.

The report also highlights the impact that an increase in working women is having on the beauty market. “According to the National Institute of Statistics, the number of working women constitutes 32% of the total Tunisian workforce, increasing by 7% each year, with 80% of this workforce aged 18-40 using beauty and personal care products.”

Géant and Carrefour are examples of supermarkets that have benefitted from developing parapharmacy sections (which sell all the products sold by a pharmacy except those requiring a prescription) within their stores.

However, the 2011 revolution did assist the emergence of the black market, according to Euromonitor’s research, as a result of insufficient security. “Many cosmetic products are illegally imported from Algeria and sold at half the price in public places such as markets, thus hampering legitimate sales in perfumeries and cosmetics shops.”

In addition, the research shows that there is a large counterfeit market, dominated by premium brands. “Sales especially in fragrances and colour cosmetics will continue to be constrained by the black market as consumers opt for products within a lower price range,” added the report.

Over the next five years the Moroccan consumer base for cosmetics is expected to expand, including consumers of premium brands. According to Euromonitor, manufacturers are starting to focus more on innovations to attract new customers.

“The main trend in new product development is segmentation, for example, cosmetics for men or women, by age with a particular focus on mature consumers and teens, skin types and skin problems,” added the research. “In addition, an increasing number of new products are based on natural ingredients, which are valued for their unique properties and perceived safety.”

Mass brands have dominated as grocery retailers lead as the distribution channel for beauty products. This is supported by the growth in retail volume shares in 2011 held by products in small packages, stated the report. “The opening of more convenience stores, neighbourhood supermarkets and hypermarkets boosted grocery retailers’ retail value share. Meanwhile, smaller pack sizes in hair care, oral care and bath and shower consolidated the position of traditional independent small grocers.”

Nevertheless, L’Oréal Maroc holds a leading market position, and has invested strongly in advertising. The company offers a large portfolio of recognised brands such as Maybelline, Garnier, L’Oréal Paris, Ushuaïa, Elsève and Vichy.

According to Euromonitor’s research, Algerian consumers are showing an increasing interest in beauty products and “a growth in colour cosmetics, in particular mascara and lipstick, is expected alongside fragrances, men’s grooming, sun care, skin care and depilatories.”

Algeria has also seen an expansion in domestic production within the beauty and personal care industry. However, all local manufacturers import their raw materials from abroad and continue to be impacted by the global price increases in raw materials. “This is increasing unit prices and value performance but slowing down volume growth despite manufacturers striving to maintain consumers’ loyalty,” added Euromonitor.

Nevertheless, imported international brands (mainly in the premium price platform) remain the leaders in the beauty and personal care market in Algeria. “However, domestic manufacturers offering mass brands are gaining share and represent significant competition in the market,” stated the report. “Consumers face high inflation and price increases for primary goods are moving [them] towards cheaper brands.”

The potential, opportunities and challenges for consumer-facing companies targeting the Egyptian healthcare and beauty market exist alongside the country’s economic and political instability. The political turmoil in the country has catalysed the Egyptian economy’s contraction, strongly impacting consumer spending power and behaviour.

According to Euromonitor, consumer spending power will be limited as they become more cautious about where they spend their money due to the country’s poor economic prospects, increasing cost of living and limited job opportunities.

“The result is lower volume sales for many companies as demand has weakened. Consumers continue to be careful about spending, with a focus on necessities, resulting in a mounting divide between demand for premium and mass products.”

However, the report added that due to strong price increases for consumer products, “growth in current value terms continues even as volumes sales growth rates lag”.

Interestingly, the research suggests that due to the diminishing spending power of urban households, “rural household spending on economy products such as conditioning hair oils and soap, albeit lower price items, will become more important growth categories.”

Since the 2011 revolution, many companies were forced to halt production, and the continued unrest in the country has had a negative impact on the market, and hampered the transport of goods and services around the country.

“At the same time, operating costs have been mounting, both in terms of the raw materials needed to produce goods in Egypt, and the cost to import goods,” noted Euromonitor. “This has especially affected premium brands which are more likely to be imported.”

However, a more positive aspect of the political unrest has been the continued growth in social media since the 2011 revolution. According to Euromonitor, this has resulted in a measurable tool for companies to cheaply assess the marketing success of health and beauty products online, before investing in more costly promotional platforms and efforts.