Moments before the interview, I stared out at the lights of Kigali, at the line of lampposts snaking around the valley toward the skyscrapers on the next hill. I wondered how the darkness must have felt only years before, and why this was all changing. Soon a voice answered on the other end of the line, a voice carried through a hair-thin wire on the ocean floor, brought hundreds of miles into the heart of Africa. And I asked him, “What brought you – Scott Ford, the golden boy of Alltel’s $28 billion buyout – to Rwanda?” 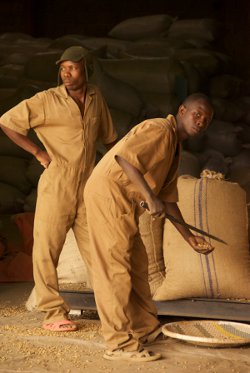 Employees at the dry mill prepare bags of green coffee beans for shipment to Europe and America. Picture: Mark Darrough

The story starts on the old county roads of Arkansas. Witt Stephens was selling silver belt buckles out west when the Great Depression brought him home to Little Rock. The government’s treasury had been emptied and highway bonds were in default. Sensing an opportunity, Witt purchased $15,000 worth of the cheap bonds in confidence that Roosevelt’s New Deal would redeem them. His gamble paid off. By 1946 Witt had investments all over the state. But it was the arrival of his younger brother Jack and their handshake agreement to create Stephens Inc. that turned Witt’s network into an empire.

According to a 1990 article in Fortune magazine, “Jack led the deal-doing that built Witt’s first millions into a billion-dollar hoard.”

While his older brother became a sort of political kingmaker in Arkansas, Jack’s influence began extending to New York and Washington. By the time that the 24-year-old Scott Ford joined the firm in 1986 after a hunting trip with Jack, Stephens Inc. had become the largest investment bank off Wall Street.

Scott worked as Jack’s right-hand man for the next decade, quickly earning a reputation as a relentless acquisitions phenom. In 1996 Jack decided to pawn off his talented protégé to one of the firm’s biggest clients: Alltel Corporation, a rural telecommunications provider headed by Scott’s father, Joe Ford. That same year the U.S. government had liberalised the telecommunications industry, and Joe needed the acquisitions acumen of his son to expand his company at such a pivotal juncture.

Fighting off skeptics who labelled his arrival a nepotistic handout, Scott quickly began showing the substance of Jack and Joe’s intuition. Appointed president in 1997, he spent $12 billion buying out smaller competitors before his promotion to CEO in 2002; guided the company through a near industry collapse while producing soaring profits; and by 2007 had transformed Alltel from a regional player into the nation’s fifth largest wireless carrier. Then Verizon Wireless came knocking in 2007. Scott responded by spearheading a two-year, $28 billion leveraged buyout that made Verizon the largest cellphone provider in the nation.

The three freedoms of Western civilisation

On a cool Rwandan summer night three years earlier, the successful American executive found himself in a conversation with President Paul Kagame – the man who had led Rwanda out of the 1994 genocide and was now ushering the country into an era of economic growth. The two men discussed the tragic history of Africa: how the west’s aid and paternal guidance had handicapped the economic spirit of its people. But they also discussed the three freedoms of western civilisation – spiritual, political, and economic – and how each had caused the west to prosper.

“Those three freedoms are what western civilisation has descended and prospered from,” Scott recalled. “Where they exist, they’re self-perpetuating and self-propagating. Where one of them is absent, the other two eventually let go.”

Both men agreed that private, profit-driven enterprise was the only vehicle to achieve economic freedom. The long-held theory that charity was the solution to Africa’s problems was enthusiastically dismissed. Now was the time to create a sustainable, competitive economic environment, and President Kagame saw Scott as an imperative player in achieving this goal. Before leaving the president’s compound that night, the two men had bonded over a shared belief in the capitalistic market.

As a result, Scott became increasingly involved with the “Friends of Rwanda” network, a small circle of U.S. businessmen dedicated to Rwanda’s development and headed by Dale Dawson, Scott’s former boss at Stephens Inc. As the Verizon deal dragged on Scott became a kind of aide-de-camp for the Rwandan government, reviewing government contracts with western companies, joining Kagame’s progressive Presidential Advisory Council (PAC), and working on a model to broaden the country’s meagre power grid. Meanwhile he became convinced that his most valuable contribution would be to directly invest by building a successful private company, and to do so in an industry significant enough to demonstrate social change and economic profitability.

After the Verizon buyout was finalised in January 2009, Scott came to that spring’s PAC meeting with a due diligence team to find an investment opportunity with the most leverage. The team considered several industries, including tea, tourism and banking; however, they found the most opportunity in the coffee export market. The reasons were more economic than social: coffee was a core business in Rwanda and the second largest dollar-traded commodity in the world. It was a liquid market with a global demand, and there were only two well-capitalised players in a capital-intensive industry.

Recent shifts in the industry also pointed to coffee as a successful investment. Rwanda was historically known to produce mediocre grade coffee that attracted little international attention. Although the unprocessed cherries were some of the finest in the world, the market was tightly controlled by the government and mired in a “low quality/low quantity” trap. After the genocide, President Kagame liberalised the industry, removing trade barriers, creating incentives to invest in coffee production, and facilitating entrepreneurship among small plot farmers. By Scott’s arrival in the country, Rwandan coffee had earned a reputation as a high-quality product that consumers were willing to purchase at premium cost.

Underlying all of his incentives, however, was the government’s provision of a legal framework that its neighbours did not offer.

“We looked around at several other countries, but the reason we’re doing business in Rwanda is this: at the end of the day, I can obey all of their laws and all of their customs and be in full compliance of U.S. laws. Rwanda has a set of laws that they enforce, and if they come against a problem, they fix it. When Rwanda shows that it’s actually attracting capital by being honest, then others will start saying, ‘Maybe we ought to try that approach’.”

Scott and his new on-the-ground management team negotiated the purchase of the old government-owned export factory in Kigali, renaming it the Rwanda Trading Company (RTC). Later that year, he and his father bought and renovated a 5,200 m² roasting facility in Little Rock to provide their customers with a vertically integrated coffee supply chain. They also invested heavily in their Rwandan suppliers, financing farmers throughout the harvest season with low rates and providing capital improvements for local washing stations (“wet mills” that aggregate smallholders’ cherry beans, wash them, and process them to parchment before being brought to the RTC dry mill). The result of these downstream investments was trust – by increasing the profitability and efficiency of the producers, the supply chain became more consistent; and with a consistently high-quality supply of beans, customers knew what they were buying.

Scott’s employees at the plant were paid 25% to 30% premiums over the local labour market, and his Rwandan managers were trained in everything from supply chain management to financial analysis. He valued long-term productivity over short-term gains, a doctrine that had earlier pushed Alltel into the Wall Street limelight.

Within two years RTC had grabbed roughly 30% of Rwanda’s coffee export market, a testament to the transformation of a debt-ridden government factory into a robust private enterprise. And it had raised the prices for the country’s hard-working coffee farmers at the same time. This was a product of the RTC’s successful entrance into U.S. and European markets, thus improving the industry’s brand as high quality, Arabica coffee.

“You have to aggressively manage that which you can,” Scott said. “You have to be patient with the people you’re dealing with. And if you teach people how to make a profit, then they become free.”

Scott learned the American dream from industry titans like Jack Stephens and his father. He found his own success by aggressively pursuing it, then brought his ideas to a country that grew brighter with their arrival. He is the new icon of the African developer – the businessman who invests in a sustainable model, and the teacher who trains for a profit and pushes his students toward economic liberty.

Mark Darrough is a writer and photographer for the ISOKO Institute, a Kigali-based think tank that promotes private enterprise development.