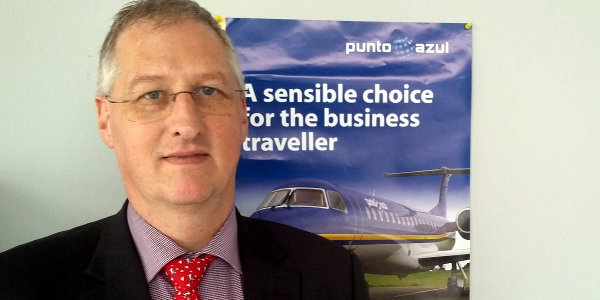 Central Africa’s aviation industry holds untapped opportunities to better serve the business community, especially those employed by the oil and gas industry needing to travel around in this hydrocarbon-rich region.

The company wants to differentiate itself from competitors by focusing on safety, quality and reliability. According to Janata, for insurance purposes many corporate customers need to purchase air services from operators that are fully certified.

Within the coming weeks Punto Azul will start offering charter flights connecting cities such as Malabo, Bata, Mengomeyén, Douala and Port Harcourt, while later destinations will include São Tomé, Libreville Yaoundé, Abuja and Accra. It also plans to introduce scheduled flights aimed at the general public.

Janata, born in Colombia to European parents, had a long 22-year career at Lufthansa. Following his time with the German carrier, he moved to Rwanda to lay the groundwork for the rebranded RwandAir. In 2012 he was invited to Equatorial Guinea to help with the launch of Punto Azul. However, after he left, the company encountered troubles and had to cease operations. Janata was subsequently asked to come back and run the airline.

He says until Punto Azul has all the in-house expertise in place, it will outsource the operation of the airline to a third-party operator. “We will work with an operator for some time while we set up our own operations, which takes time – especially in terms of maintenance.”

Most oil-producing countries in West and Central Africa have been negatively impacted by the drop in the oil price, and Equatorial Guinea is no exception. “Due to the low oil price, oil companies are struggling, no question about it,” says Janata.

However, the current situation does present some opportunities for Punto Azul. He says that instead of deploying certain technical personnel at each site, oil companies, in a bid to cut costs, are contracting fewer people and moving them from one site to another – creating demand for aviation services.

“So to optimise operations they utilise maybe one engineer for three different platforms. So we don’t see the low price as a crisis for our type of business. We have to do it very smart, we have to hear what the needs are from our customers, and meet them.”

He says demand is also not purely from the oil and gas sector, with many other industries as well as embassies and governments in the region requiring aviation services.

In the coming years there could also be opportunities for the airline as Equatorial Guinea plans to open up to tourism. In addition, the country has ambitions to establish the capital Malabo as an air travel transit hub for the region, with a new airport terminal already under construction.

Janata says human resources is one of the major challenges of operating an airline in Equatorial Guinea. “There are laws that prescribe for each expat you bring in, you have to have a certain number of locals employed – which makes sense. But in our business it is simply impossible to find a local pilot, for instance. Now that makes an operation much more expensive than somewhere else – at least in the beginning until you are really able to train local people.”

Competition in West and Central Africa’s aviation sector is also increasing with operators like ASKY Airlines expanding aggressively in the region. However, Janata says he is not having sleepless nights over competitors as Punto Azul is focusing on a specific type of clientele.

“We will not be a huge airline in terms of volumes, but rather a quality airline aimed at targeted customers.”