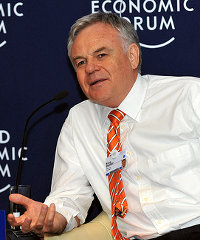 “[Africa’s] young people are ambitious. I’ve lived in Europe for six years but you don’t find that. European young people are talking entitlement. There is wealth behind them and they just want to be at the same level as their parents. In Africa there is that ambition,” said Bekker during a session at the recent World Economic Forum on Africa, held in Cape Town.

Naspers is a multinational media group listed in Johannesburg and London. The company’s principal operations are in internet platforms, pay-television and print media. According to Bekker the company currently has a presence in 49 African countries.

Although Bekker is optimistic about Africa as a business destination, he said corruption is a major problem that needs to be stamped out. “The problem with corruption is it totally immobilises everyone. Just imagine you are a young [person finishing school and] you have to decide on a career. If you are in China you look up and you see who is making money, it is the entrepreneurs. They have an engineering degree . . . and are billionaires in dollars. That is the people they want to emulate. In many countries in Africa, you look up and you see no engineers, you just see people that play the political system and make money, and you are so discouraged, and you say, ‘Why should I study for five years to be an engineer, when there is no one making money this way?’ The way to make money is to go and study a BA for three years, go into politics and milk the system,” he explained.

He added that African governments should follow India and China’s example, and make their countries more attractive for their skilled professionals living abroad. “Skills is at the heart of the new economy. I studied at a university in New York in the early 80s. We were five Africans, one from Nigeria, one from Ghana, one from Kenya, and a lady from Madagascar. Today I’m the only one in Africa. India and China . . . made their countries very attractive to competent people by showing you can actually do very well with skills and not connections. And I think that is one of the big things Africa has to do,” Bekker noted.