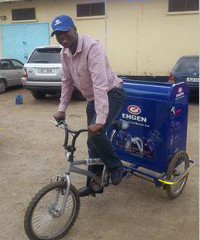 Engen has supplied bicycles and vending carts to its in-country distributor Gleco to sell Engen products to taxi and bus operators in Lusaka. These vendors cycle to the various public transport ranks and offer Engen’s lubricants directly to the drivers, meaning they don’t have to go to auto shops to purchase these products.

Chanda Mhango, commercial manager at Engen Zambia, told How we made it in Africa that the vendor cart salesmen operate much in the same way as ice cream carts. He says taxi and bus drivers are busy people, and that Engen wants to make it easier for them to buy the company’s products.

In addition to increasing sales, these branded bicycles also double as a marketing tool to boost awareness of the Engen brand.

Cyclists are not restricted to routes between Engen’s depot and specific ranks, and can move around Lusaka as the market requires.

There are currently four bike vendors operating in Lusaka, but according to Mhango the company plans to grow this number.