“This is an exciting time on our continent … This is Africa’s century. And if you don’t know that yet, you need to wake up to that fact.” 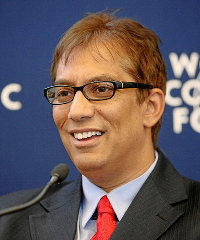 So said Dr Iqbal Survé, founder and chairman of the Sekunjalo Group, during a session organised by think tank Accelerate Cape Town. The Sekunjalo Group, based in South Africa, is an investment holding conglomerate with investments in more than 70 private and public companies in Africa. In 2007, the group was nominated by the World Economic Forum as one of the 125 “New Champions” also called the Community of Global Growth Companies.

Survé noted he is not making these comments as a “blind African optimist” or as a “misguided individual”. He said he sees in Africa what many of the world’s fastest growing companies saw in countries such as China, India and Brazil.

He mentioned that the GDP of countries such as Angola and Botswana increased significantly over the past years, and that the whole continent is “coming alive”.

“You must believe in this continent based on sound fundamentals,” said Survé.

He also predicted that people in sub-Saharan Africa will increasingly stand up to their governments. “What you are seeing in the north of Africa, is going to happen in the south. Not necessarily in the [same] form that it is happening, but the young people are demanding a greater say in their future.”

As an anti-apartheid activist and trade unionist, Survé started out his career as a medical doctor specialising in the care of Robben Island prisoners and apartheid detention and torture victims. During this time he befriended many of the politicians who today make up much of President Jacob Zuma’s cabinet.

He was a late entrant into the business and Black Economic Empowerment arena. After a difficult start, in which Survé realised his limitations in terms of business skills – and addressed them – the Sekunjalo Group became a success. This success, however, was tempered with ongoing setbacks, including losing substantial sums of money on flawed business deals.

He encouraged the audience to set long-term goals and to work strategically towards achieving them.

Survé added that he believes business should be about people development, not just making money. “It is possible to create a form of capitalism that doesn’t treat people like commodities, and that is what Africa requires.”